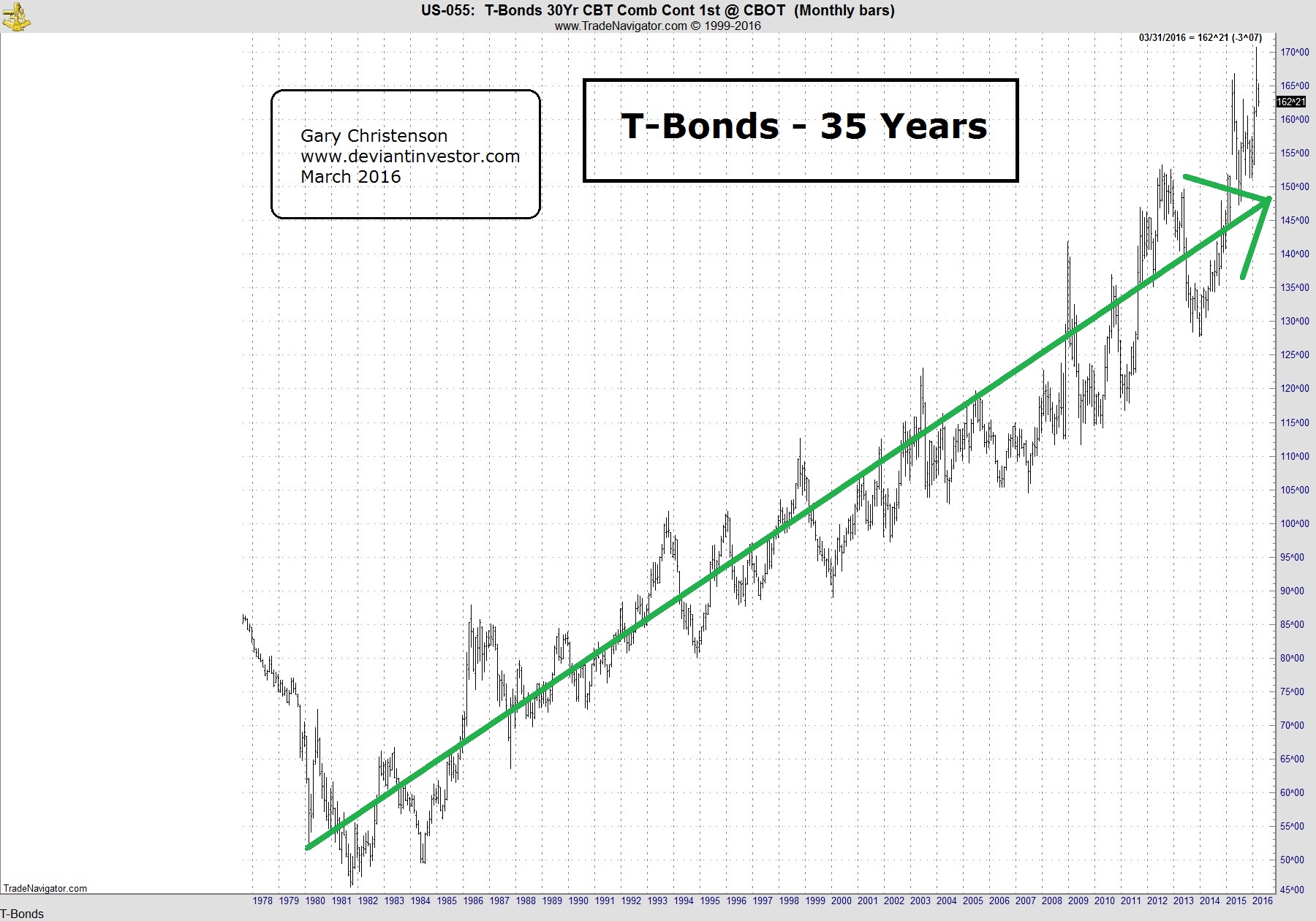 There is money to be made so the game must be played…  It’s always “ShowTime” in the financial markets.  What is the game plan?

Levitate the bond market. See chart below.  Keep those interest rates dropping so the bond market continues its 35 year climb.  Oops – $7 Trillion in bonds with negative interest rates, at last count, with more from Japan this week.  Have we reached a limit?  Probably not, but what could go wrong lending money to insolvent governments who guarantee they will return less than they borrowed in 10 years? Currencies must retain some purchasing power. No Argentina or Zimbabwe devaluations will be allowed.  When the dollars/euros/yen/pounds barely buy groceries the crowds will get restless and that must be avoided.  So keep the currencies strong – which is code for devalue them slowly enough that people don’t riot.  Remember when you could deliver a baby in a hospital in the U.S. for under $100?  Really!  It was a long time ago and the dollar has devalued considerably since then.

Increase debt exponentially. The bubbles must not implode and that requires continual inflating and massively more debt each year.  What could go wrong with exponential debt increases?  Hint:  One penny invested at 6% per year for 1,000 years exponentially grows to $200,000,000,000,000,000,000,000.  (Yes, really!)  Exponential growth of debt mathematically cannot continue forever. Allow gold to increase in price slowly, BECAUSE IT MUST, but fight it every step of the way. They own the media, the markets, and the High-Frequency-Traders so they use them to discourage gold purchases and promote paper debt, paper stocks, paper bonds, and digital bank accounts.  Sell the paper story –  HARD! Keep the churn in play. Take your slice of every transaction, every credit card charge, every debit card transaction, and bring in the “big guns” to sell the “war on cash” so all those unbacked fiat currencies remain in digital form in a bank – easy access you know …….

The next crisis will be funded by depositors. Yup, that means us.  But it can’t happen in my country …… Don’t be naïve!

Distractions are critical. Elect a president every four years, as if it matters.  How about a war in Syria?  A terrorist attack in some major city?  Zika virus?  A Kardashian scandal?  Russia on the move?  Chinese market crash?  Don’t forget to blame someone else, and keep the money churning!

Play your own game, exit the “digital money churn,” and reduce your “financial paper footprint.”

Stack gold and silver.  You can buy from Tom Cloud and Why Not Gold.