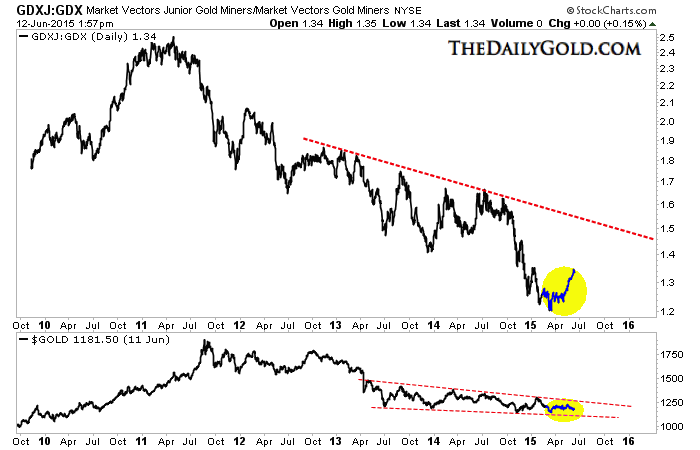 Despite three consecutive weeks of losses precious metals have failed to mount much of a rally. Gold closed last week above $1170 and may close this week below $1180. Meanwhile, Silver has struggled to mount any rebound and appears to have lost $16 as the week comes to a close. While the risk of a final breakdown is growing, one positive we see is the relative strength in the riskiest parts of the mining sector.

The chart below plots GDXJ against GDX. The ratio peaked in April 2011 and may have bottomed in March 2015. Even as the spring rally in precious metals fizzled GDXJ continued to outperform. A few days ago the ratio reached a 5-month high. Take a look at GLDX against GDX. GLDX tracks exploration companies which are much smaller in market cap than those in GDXJ. The ratio has formed a 2-year base and rounded bottom that appears to be quite strong. Last week the ratio touched a 7-month high. Stepping back from relative strength, I want to take a look at GDXJ in nominal terms. GDXJ is far more liquid and therefore relevant than GLDX. The chart below is the weekly candle chart for GDXJ. Note that GDXJ has made three lows in the past eight months. Volume has decreased at each subsequent low. This indicates that the strength of the selling has abated. It will be interesting to see how GDXJ performs if and when Gold breaks below $1150. GDXJ is trading near $25 and has good support at $21-$22. While not a buy signal, the relative strength in GDXJ and GLDX tells us a few things. It argues that the bear market is likely to end soon and that with respect to all mining stocks, GDXJ and GLDX could lead the recovery. However, in the meantime we are waiting for Gold to break below $1150 and then $1100 and we are waiting for GDXJ to retest its lows. Be patient as those developments would bring about better and safer opportunities. Consider learning more about our premium service including our favorite junior miners which we expect to outperform in the second half of 2015.