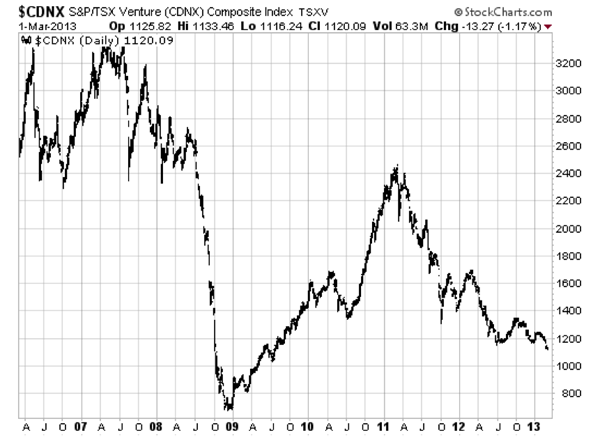 There is an old saying: to “pound the table”. It essentially means to vehemently assert one’s position. I rarely pound the table. I am, as of today, pounding the table!  [Editor’s Note: The following post is by TDV Editor-in-Chief, Jeff Berwick]

I am talking about the junior gold stocks. Gold stocks in general, but especially the juniors.

To preface, those of you invested in these securities in 2008 remember the worst crash of all time: the crash of the junior gold stocks from a high on the TSX-Venture exchange (where most are traded) of over 3,000 to under 700 in less than a year. Just before 2009 was the last time I pounded the table (and the graph above shows that I was right).

I made many investments in that year that returned ludicrous gains. One in particular I remember was a private placement in Copper Fox (TSXV:CUU) at $0.07 with a full warrant at $0.10. A little more than two years later and it was trading above $2.60.

I thought I was doing well, but Mexican tomato magnate, Ernesto Echavarria, invested $6 million into the company a few months after I did at $0.056 with a full warrant at $0.075. If he sold at the top, that would mean a profit of approximately $400 million+ in less than two years. Not bad for a tomato guy.

These are the kind of gains possible when things are this bad in the sector, like they were in 2008.

2008 is very similar to today, especially when you look at the major gold stocks vis-à-vis gold bullion. In terms of the metal underlying these companies, it is just as bad now as it was in 2008.

But many things are different now than in 2008, most in favor of the gold stocks.

For one, the overall US stock market had collapsed right along with the gold stocks in 2008. Today, as you can see, that is definitely not the case with the Dow at new nominal highs.

Even more importantly, as you can see in the following chart, the true money supply growth in the US had almost reached 0% in 2006, which led to the 2008 collapse.

Since then the money supply growth in the US has been above 10% per annum for a record period of time. In short, nominal collapses don’t happen when the money supply, prodded by Ben Bernanke and his most dovish speech of all time last week, is being goosed at these levels.

In the opinion of TDV, the reason the Dow is at record nominal levels is because most market participants have been fooled into believing that this fake money supply growth is real growth. In time, they will realize they’ve yet again been fooled by monetary inflation. When that happens, many of them will also realize what is really going on and gold will surge well over $2,000/oz. And, when that happens, many will be looking for ways to get “in” on the gold market and after seeing gold rise 50% in a short period of time they will look at other ways to play the gold market.

That’s when they will again look to the gold stocks and we will see a bubble for the record books.

This is truly a gift for those not already invested or not fully invested in the gold stocks. It will be a ride for the ages… all it takes is the cajones to pull the trigger. As someone who has been involved in these markets for the last twenty years, I am literally pounding the table for you to get in now.

I’M NOT THE ONLY ONE

TDV’s Senior Analyst, Ed Bugos, is considering upping our total portfolio allocation to gold juniors from 20% to 25% and downgrading cash. He’s been waiting for this opportunity. That is why he never had a large percentage of our portfolio in these stocks; he has been expecting and writing about a pullback in these stocks for the last two years.

Of course, Ed was restrained from outright selling these stocks due to TDV’s over-arching theme: we believe this financial and monetary system is heading toward The End Of The Monetary System As We Know It (TEOTMSAWKI) and, because of that, we never want to be fully out of this market.

TDV Golden Trader’s Senior Analyst, Vin Maru, is under no such constraints and he told his subscribers to sell all their trading positions in gold stocks in February of last year, almost perfectly picking the top of the short-term bull market in the TSX-Venture exchange of nearly 1,700. Today it sits perched just above 1,100.

Even Ed Bugos, who is more restrained in trading, had only recommended one gold stock in the last year fully expecting this dip.

Both he and Ed are now licking their lips. In fact, tonight, Ed Bugos is putting out an alert to TDV Premium Subscribers on an African junior gold stock currently sold down to $0.07 that he thinks is almost a sure-thing to go well above $0.20, and likely be a ten-bagger in the next year.

It takes a lot of courage to pound the table when a sector is so out of favor. But, it is made easier when you understand most of the market fundamentals that almost are sure to lead to a major resurgence in this sector.

If you’ve been waiting to get into this market, now is the time. Anarcho-Capitalist.  Libertarian.  Freedom fighter against mankind’s two biggest enemies, the State and the Central Banks.  Jeff Berwick is the founder of The Dollar Vigilante, CEO of TDV Media & Services and host of the popular video podcast, Anarchast.  Jeff is a prominent speaker at many of the world’s freedom, investment and gold conferences as well as regularly in the media.