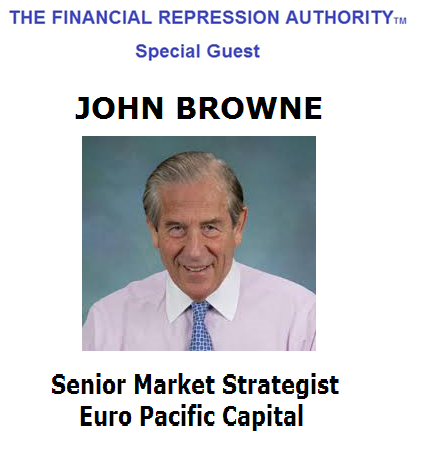 “It is the financial repression of the ordinary individual in America. It is happening through three main avenues or arteries” SPECIAL GUEST: JOHN BROWNE is the Senior Market Strategist for Euro Pacific Capital, Inc. Mr. Brown is a distinguished former member of Britain’s Parliament who served on the Treasury Select Committee, as Chairman of the Conservative Small Business Committee, and as a close associate of then-Prime Minister Margaret Thatcher. Among his many notable assignments, John served as a principal advisor to Mrs. Thatcher’s government on issues related to the Soviet Union, and was the first to convince Thatcher of the growing stature of then Agriculture Minister Mikhail Gorbachev. As a partial result of Brown’s advocacy, Thatcher famously pronounced that Gorbachev was a man the West “could do business with.” A graduate of the Royal Military Academy Sandhurst, Britain’s version of West Point and retired British army major, John served as a pilot, parachutist, and communications specialist in the elite Grenadiers of the Royal Guard.

In addition to careers in British politics and the military, John has a significant background, spanning some 37 years, in finance and business. After graduating from the Harvard Business School, John joined the New York firm of Morgan Stanley & Co as an investment banker. He has also worked with such firms as Barclays Bank and Citigroup. During his career he has served on the boards of numerous banks and international corporations, with a special interest in venture capital. He is a frequent guest on CNBC’s Kudlow & Co. and a former contributing editor and columnist of NewsMax Media’s Financial Intelligence Report and Moneynews.com. He holds FINRA series 7 & 63 licenses.

“It is the financial repression of the ordinary individual in America. It is happening through three main avenues or arteries.

“I think we are now seeing a situation which you could call a liquidity trap. There is so much money around that if they start to raise interest rates they are going to discourage people even more from spending. Ordinary individuals have low wages (wages have been flat for six years at least) yet taxes are going up (the number of taxes) as well as charges (licenses and fees)”

“They are pushing on a string. It isn’t liquidity that matters but wages and income!”

“How does the Fed create income without just giving us cash in the post (mail) by just sending us checks?

“The only solution is single term politicians – Turkey’s don’t vote for an early Thanksgiving!”