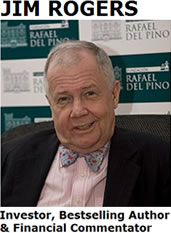 ““Financial Repression can mean many things but basically in a nutshell it is a lack of free market finance and human activity, where the government thinks it is smarter than we are!” Special Guest: Jim Rogers is the author of the bestseller, Investment Biker: Around the World with Jim Rogers. His other books include Adventure Capitalist: The Ultimate Road Trip, A Gift to My Children: A Father’s Lessons for Life and Investing, Hot Commodities: How Anyone Can Invest Profitably in the World’s Best Market, and A Bull in China: Investing Profitably in the World’s Greatest Market. Jim grew up in Demopolis, Alabama, and got started in business at the age of five, selling peanuts. Winning a scholarship to Yale, Rogers was coxswain on the crew. Upon graduation, he attended Balliol College at Oxford. After a stint in the army, he began work on Wall Street. He cofounded the Quantum Fund, a global-investment partnership. During the next ten years, the portfolio gained more than 4,000 percent, while the S&P rose less than 50 percent. Rogers then decided to retire–at age thirty-seven–but he did not remain idle.Continuing to manage his own portfolio, Rogers served as a professor of finance at the Columbia University Graduate School of Business and as moderator of The Dreyfus Roundtable on WCBS and The Profit Motive on FNN. At the same time, he laid the groundwork for his lifelong dream, an around-the-world motorcycle trip: more than 100,000 miles across six continents. He has contributed to Fox News, Worth, CNBC and others.

“Financial Repression can mean many things but basically in a nutshell it is a lack of free market finance and human activity, where the government thinks it is smarter than we are!”

“History has shown many times that we are smarter than governments, politicians and the bureaucrats – but they don’t like to give up power. When they make mistakes they blame it on us and try and make us pay for it! When they see a problem arise their first instinct is to try and suppress the public and markets. They try and do things they think will make things better, but of course it doesn’t, and only makes things worse!”

they have made. We will have exchange controls in the US again – no question. We already have exchange controls to some extent such as FATCA and other things to make it more and more difficult for Americans to do anything as far as finances are concerned. They will put on trade controls, tariffs quotas – they will come up with all sorts of things.”

Politicians don’t know what they are doing. History proves many times that politicians make things worse instead of better because what they do since they don’t know anything themselves, they ask the bureaucrats how they can save themselves. The bureaucrats rush in and say “this is the way you save yourself”. “It isn’t your fault, it is the markets fault and those evil speculators and the people! They then come up with regulations and controls. They don’t know what they are doing!”

What Should Investors be Thinking About?

“The Certainty of Economic Slowdown”

“History shows in the US we have had economic slowdowns every four to seven years since the beginning of the republic. We are going to have them again no matter what people tell you. If someone tells you we will never have another economic slowdown – please put your money in your pocket and head as far away as you can!”

“It is going to be much, much worse than 2008. There is higher debt everywhere than previously!”

“We have never had history all the central banks printing such vast amounts of money at the same time! There is a hugh ocean of liquidity floating around out there!”

Mr. Long is a former senior group executive with IBM & Motorola, a principle in a high tech public start-up and founder of a private venture capital fund. He is presently involved in private equity placements internationally along with proprietary trading involving the development & application of Chaos Theory and Mandelbrot Generator algorithms.