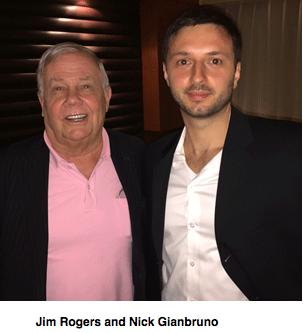 Recently I spoke with Jim Rogers about the most important investment lessons he has learned over the years.

Jim is a legendary investor and true international man. He’s always ahead of the game. Jim made a bundle by investing in commodities in the 1990s when they were out of favor with Wall Street. He’s also made large profits investing in crisis markets.

Jim and I spoke about timeless strategies that are truly essential to being a successful investor.

You won’t want to miss this fascinating discussion, which you’ll find below.

Nick Giambruno: You’ve said that many times throughout history, conventional wisdom gets shattered. What are some widely held beliefs that will be shattered in the next 10 years?

Jim Rogers: That’s a very good question. Well, for one thing, I know bond markets are at all-time highs almost in every country in the world. Interest rates have never been so low. Everybody is convinced that bonds are a good thing to invest in. Otherwise, they wouldn’t be at all-time highs.

I’m sure that 10 years from now, we are all going to look back and say, how could people have even been investing in bonds with negative yields? How could that possibly have been happening? But at the moment, everybody assumes it’s okay, and it’s the normal and natural thing to do. Ten years from now, we’re going to look back and say, gosh, how could we ever have done something so foolish?

So one of the things I do is I look to see – when everybody’s convinced that X is correct – I look to see, well maybe X isn’t correct. So when I find unanimity of a view, I look to see, maybe it’s not right. And it usually isn’t right, by the way. I have learned that from experiences and from lots of reading.

Nick: How does an investor deal with being accurate but early?

Jim: Oh, that’s the story of my life. I’ve always been accurate but early.

If I’m convinced something is going to happen or if I should make an investment, I have learned that I should wait for awhile, because maybe it is too early. And it usually is too early.

I try to discipline myself to wait longer or to put in orders below the market and let the market come to me. But even then, sometimes I’m still too early.

Nick: How did studying history help you in investing?

Jim: Well, the main thing it taught me was that everything is always changing.

If you go back and look at before the First World War, nobody could ever have conceived in 1910 that Germany and Britain would be slaughtering millions of people four years later. Yet it happened.

Nick: Is the US repeating those same mistakes?

Jim: Well, the US is the largest debtor nation in the history of the world now, and the debts are going higher and higher. The people in the US think it doesn’t matter that we’ve got all these debts and there’s no problem. People in the US don’t think that it’s a problem that we’ve got troops in over 100 countries around the world. I mean, when Rome got overextended militarily, it paid the price. Spain and many other countries have had this problem. Maybe it’s not a problem. Maybe America can have troops in 200 countries around the world and it won’t matter, but America has certainly gotten itself overextended in many ways.

Nick: Do you think wealth and power will continue to move East?

Jim: Wealth and power are moving East now, and that is going to continue. That’s because of historic reasons. There’s little doubt in my mind that China is going to be the next great country in the world. Most people are still skeptical of that. Most people know something is happening in China. They don’t really quite understand the full historic significance of what is happening in China including many Chinese.

Nick: You mentioned in your most recent book, Street Smarts, about the lesson you learned when Nixon closed the gold window in 1971. At the time you were long Japan and short the US, and you just got killed. Can you tell us the lessons you learned from that experience?

Politicians play by different rules from the rest of us. They just change the rules. Mr. Nixon just changed the rules because he was having a serious problem, and he thought America was having a serious problem. And when they changed the rules against all logic or against history, something is going to give. If you are on the wrong side, you are the one who is going to give, and I’ve learned that.

Nick: Any other investing lessons you’d like to mention?

If you can just first stop and have that thought process, then you can think it through. Let’s say that these headlines are wrong. “What should I do?” You are probably going to be a successful investor.

Be prepared for the fact that you are probably going to be early. If you can figure out how to spot the exact bottom and the exact turn, please call me.

Nick: This is exactly what Doug Casey and I do in our Crisis Speculator publication (click here for more details).

Shifting gears now, you’ve also said that Harvard and other universities could go bankrupt. Why do you think that?

Jim: Well, first of all, some of the American universities have a very, very high cost structure. It’s astonishing.

Let’s pick on Ivy League. I went to an Ivy League school, so I can pick on them a little bit. They have a high cost structure. They think that what they know is correct and that people will always pay higher and higher prices.

To go to Princeton for four years now is probably going to cost you $300,000 in the end when you figure out the tuition, room and board, books, beer, travel, and everything else.

I know that many of the things that they teach in Ivy League schools these days are absurd and totally wrong. It’s conventional wisdom run amuck, so it’s not necessarily better what you learn at those places. If you go to the right universities, and you learn the wrong things, it’s going to cost you in the end.

Then they say, yes, but it’s a brand, it’s a label that’s good. Sure, it’s a label, it’s a very expensive label, but it’s going to take a lot more than that to make you successful. Just because your grandmother gives you a Cadillac, which is a good brand, it’s not going to make you successful at finding dates, or having a good job or anything else. You have to produce on your own.

Throughout history you’ve had many institutions that have been world famous and top of the line. They’ve disappeared. It doesn’t mean Harvard can’t too. I didn’t go to Harvard, so I shouldn’t pick on any of these places that I didn’t go to. So we’ll see. I’m skeptical of all of them.

Jim: That’s a good question. Keynes himself, at the end, didn’t embrace what is now known as Keynesian economics. Keynes would probably be an Austrian now, because at the end of his life, he came to understand that some of the stuff was being misused.

The main reason people like Keynesian economics is because they think they can be powerful. They can change things. “I’m a smart guy. I went to an Ivy League school, therefore I know what’s best. And if I say it’s best, let’s do it, and it will make things better.” That’s essentially what Keynesianism is now.

The market is a lot smarter than all of us, and I wish we would all learn that. It always has been and it always will be.

Nick: Thanks for your time, Jim.

Editor’s Note: Jim Rogers told us about the importance of looking past the news that frightens others away. It’s the key to finding deep-value investment opportunities that can make you enormous profits.

It’s one of the world’s greatest wealth-creation secrets.

It’s been used by Warren Buffett, Doug Casey, John Templeton, Baron Rothschild, and many other successful investors. It’s a strategy that you can use too.

It’s exactly these kinds of opportunities we cover in Crisis Speculator. Click here for more details.

The article was originally published at internationalman.com.