Jeff Bezos is heading to the edge of space—should we be concerned for his safety? 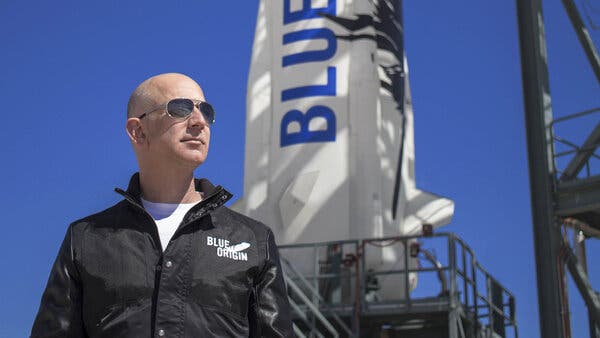 BLUE ORIGIN FOUNDER Jeff Bezos and Virgin Galactic founder Richard Branson have been working for the past 20 years to get their companies’ rockets built and launched. Now both are preparing to suit up and ride their own spacecraft. Bezos announced on Monday that he’ll blast off July 20 on Blue Origin’s New Shepard rocket, riding to the limit of Earth’s atmosphere. Meanwhile, Branson is expected to fly this summer on the Virgin Galactic VSS Unity rocket plane to the same zone.

The rich-guy space race between Bezos and Branson (SpaceX’s Elon Musk is the odd man out for now) may convince other well-heeled space tourists who want assurances that a rocket ride is both fun and safe. But experts note that space travel is always risky, even when spacecraft have undergone years of testing. Blue Origin’s flight will be its first launch with human passengers; previous flights have only carried a mannequin. For Virgin Galactic, it will be only the second time the rocket plane has carried people.

“When you’re flying humans, it’s always one step more complex than just flying an uncrewed mission, and that’s because you have the lives of six people that you have to worry about,” says Laura Forczyk, an Atlanta-based space industry consultant who has flown several times with NASA on zero-g research flights. “Blue Origin has no reason to fear that something will go wrong, but you never know. Space is a risky business.”