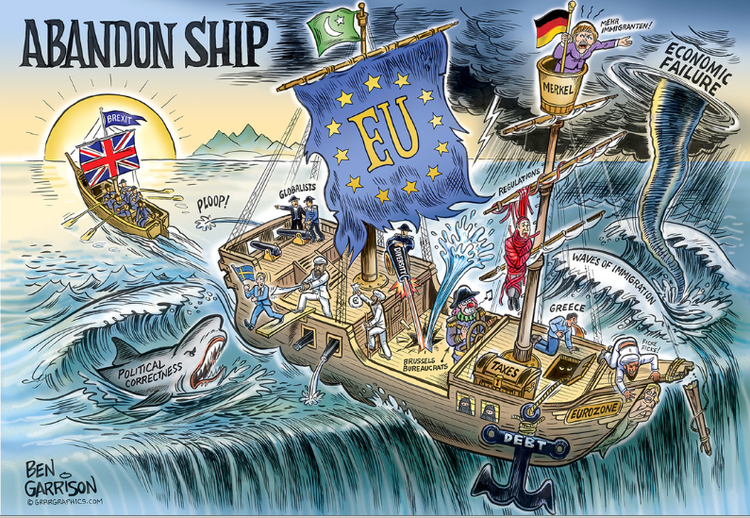 Well, the Brits decided to leave.  Those of us who prefer smaller government to bigger; prefer more liberty to less; prefer greater economic freedoms than fewer; prefer entrepreneurism to big business cronyism; and prefer sovereign nation states to supra-national authorities are very happy right now.  Once this transitionary phase (of elite panic, which is just priceless to watch) and market volatility is behind us, the UK economy will most likely rock and roll; freed from the shackles of 13,000 edicts and regulations drawn up by wine and cheese eaters inside labyrinth in Brussels—aka EU headquarters; it’s a Franz Kafka wet dream for feckless bureaucrats.

Return of the UK fishing fleet might be good for jobs.  A Cambridge/Oxford research park to challenge Silicon Valley would be a nice start. Five and ten man manufacturing shops across the UK freed from the burden of regulation and massive overhead could lead to something extraordinary.  The realization there is no reason for the talented financial people of London to climb aboard the Frankfurt-Titanic will surprise.  I think you get where I am going here…

The rationales for the UK leaving have been hashed over pretty well, especially now with the gift of hindsight.  Despite seemingly the entire staff of the Financial Times still in denial, with commentary bordering on bitter, there is a clear broad rational for all of this; I return to a commentary from Citron Zoakos once again, from May 2016:

In recent years, economists have debated fruitlessly over the importance or lack thereof of financial imbalances and excessive debt. To no avail, they have sought answers to the question of what happens if these problems are not addressed by policymakers. Now we know: Voter insurgencies happen; revolts happen that topple the established policymaking elites.

In short, the inability of authorities to deal with the credit crisis (not to suggest an easy task) and their decision to “save” the global financial system through massive injections of liquidity (at the expense of rising public debt) to save legacy (read: crony capital protected assets) and apply severe financial repression (zero and negative interest rates) has benefited owners of capital through the massive inflation of financial assets; yet those owners of labor (regular people who do real things for money—build stuff and serve) have wallowed with high unemployment, no return on savings, a decline of their largest asset (their home), and loss of real income.  The UK lesson is a microcosm of this strident difference in world view between the elites and the average guy on the street (in every developed country it seems)—those in London (insert New York) love the EU (insert US Federal power); those serfs in the Northern England hinterlands (insert US fly-over country) do not.

Here’s the rub, again from Mr. Zoakos, and it dovetails on those who are urging the EU to re-invent itself immediately [my emphasis]…

In Europe at the moment, both the owners of capital and the owners of labor oppose vigorously these types of structural reforms (severe entrepreneurial structural changes) But without such reform, the politics of introducing Brady-style debt relief conferences will be reduced to struggles between those two groups over who will to pay for debt relief: the owners of capital or the owners of labor. The only outcome of debt relief without revolutionary, entrepreneurial structural reforms in the markets for goods and services (rather than in the labor market) will be the typical European class struggle. History has shown how dangerous this can be.

Is this message clear to the one who matters most, German President Angela Merkel? And even if it is, is it too late to reform given the turmoil inflicted on the lives and cultures of the EU states?  How does one trust President Merkel given the debacle she magnified with her unconditional support of refugees who are destroying thousands of years of Western culture in very short order?

A list of some off the cuff implications of Brexit (this is far from exhaustive):

At the very least we should expect elevated levels of market volatility in the months ahead.  And we shouldn’t be surprised if the whole single currency experiment comes unglued.  At some point, it will no longer be in Germany’s best interest to hold this thing together. It Was Incredible, Extraordinary, How To Take Advantage of Exciting Currency Volatility