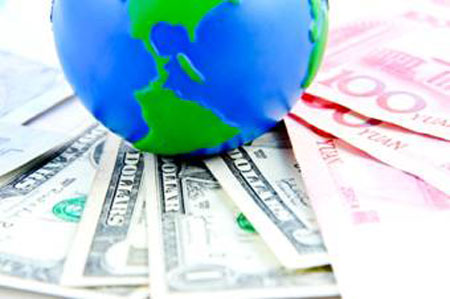 Just eight or nine years ago, currencies were the hot-ticket item in the investment world. That was when central bank easy-money policies helped investors realize (and exploit) the interconnectedness of global economies and financial markets.

It was also pretty easy to bet against the U.S. dollar, too.

But then the financial crisis hit.

Then the greenback became the recipient of safe-haven capital flows. At the same time, emerging-market currencies, commodity dollars and the more-popular-than-ever euro were hung out to dry.

Investors Cash out of the Currency Game

Newbies hadn’t realized the intricacies of the foreign exchange market. Their orientation was made painful by the financial crisis, and investors quickly lost their appetite for currency investments.

Currencies are back in the headlines this year, but not because investors are excited about them.

Rather, because China is battling renminbi valuation. On top of that, emerging markets’ dollar-denominated debt has become costlier because their currencies have lost so much value so quickly.

Regardless of whether currencies are hot or cold with investors and traders, the foreign exchange market still trades and currencies offer returns … if you choose pay attention.

That’s why today I’m giving you my view on the U.S. dollar, Aussie dollar, euro and Japanese yen.

Starting off with the U.S. dollar, I think it has greater upside potential in the coming months and even years.

How can the dollar climb higher after rising about 20% since June 2014? Because the U.S. is a relatively attractive destination for investment capital.

Barring a financial crisis that will shake the entire globe, the U.S. economy is more stable than most emerging markets, China and even many developed European nations. That will draw more foreign money to U.S. shores.

When this money makes its way to the U.S., those euros, pounds, yen and rubles are exchanged for dollars.

Interestingly, the U.S. dollar hasn’t been behaving like a safe-haven currency of late.

It’s not being borrowed and sold — as a carry trade currency — to fund investments elsewhere. Instead, it’s showing some correlation to risk assets such as U.S. stocks.

This suggests the dollar is being targeted for its potential to hold value or even generate speculative gains.

All said, this underpins my longer-term bullishness for the U.S. dollar.

In the interim, however, I think the buck might soften up before heading higher.

There is some concern about the influence a strong U.S. dollar is having on U.S. exports and, thus, the trade deficit. But changing expectations for a Federal Reserve interest rate hike is probably the primary driver. Ever since the September U.S. jobs report disappointed, investors have been pushing back the likelihood of the inevitable hike.

If rates in the U.S. are not rising, then the greenback is not gaining an advantage (or erasing its disadvantage) relative to the interest rates on competing currencies.

For example, based on respective central bank benchmark rates, the Australian dollar currently boasts a 2% yield while the yield on the U.S. dollar is essentially still zero.

All things being equal, if you were choosing to park your money on one currency or the other, would you choose the one yielding 2% or 0%?

This is why I think the U.S. dollar bull scenario might undergo a bit of a rethink in the near-term.

To finish a three-wave consolidation pattern, the U.S. dollar index would likely need to drop to the 91 range. From there it could begin another sustained move higher.

That, of course, is the U.S. Dollar Index, which is an uneven basket made up of six foreign currencies.

There are certainly ways to trade the U.S. Dollar Index, but you can also bet on how the dollar will fare against any one currency.

The euro, interestingly, has assumed a sort of carry trade role at times. It’s the role to which the U.S. dollar laid claim until last year. Before that, the Japanese yen was the notorious carry trade currency.

The euro is more than that, though.

Since emerging from the latest Greek charade, Europe has mostly stabilized and investor confidence in the euro area has improved.

Importantly, the European Central Bank has committed to a policy of ongoing monetary accommodation to ensure the economic recovery is not smothered.

In one sense, the ECB’s policy is bullish for the euro zone and thereby supportive of the euro. But in another sense, it undermines the euro’s yield relative to the U.S. dollar since the Federal Reserve is expected to hike rates soon.

All things considered, I think the euro is in a position to extend higher.

The orange is an alternate wave count, off of which I’m basing my bets. This suggests the euro should continue higher before this move is done and it weakens vs. the U.S. dollar.

And with the absence of inflation across the developed world, notably in stagnant U.S. wages and falling commodity prices, one might just assume Japan is continuing with where its lost decade left off.

But check out this chart from the Wall Street Journal. There’s a lot to be desired, sure. But that chart medley suggests Japan isn’t in too bad a spot right now — especially compared to the uncertainty plaguing so many other economies.

But the Bank of Japan is very much in the same position as the European Central Bank — the same position from which the U.S. Federal Reserve has been hoping to depart — providing monetary accommodation to its economy.

Ultimately, this yield differential dynamic will power the yen lower vs. the U.S. dollar.

In the meantime, though, it looks like the yen has technical room to strengthen.

Commodities have been pummeled. And China is now feeling the effects.

The pain in these investments has been well-documented.

Less documented, but entirely relevant, has been the assault on the Australian dollar.

So, the value of its currency has fallen in kind.

Inherent in that performance has been central bank expectations. The Reserve Bank of Australia has been cutting or keeping rates low to alleviate commodity price pressures on its economy.

The Australian dollar lost 32% of its value since the first half of 2013.

In the latest meeting, however, the Reserve Bank of Australia did not cut rates — they remain at 2%. And the Federal Reserve is expected to keep delaying the start of its rate hike cycle.

Combine rate expectations with the technical chart setup and bearish sentiment extremes for commodities and China (a huge customer for Australia) … and you’ve got the makings of an Australian dollar rally.

Want to play these currencies?

You can trade the U.S. Dollar Index with the PowerShares DB U.S. Dollar Bullish ETF (UUP).

These ETFs do kick off a dividend based on the underlying country’s benchmark rates. But as you might suspect from central banks’ race to zero, their yields are nothing to write home about.

Also, currencies tend to move slowly relatively to other investments, so these ETFs aren’t likely to generate outsized returns unless you catch a good trend.

Shorter-term investors may consider using options on the ETFs I mentioned to capture sizeable returns in a short amount of time.

In fact, I just recommended such a trade to my Natural Resource Options Alerts guys on one of these currencies, and it’s already up more than 17% in just a couple of days. And my “E3” system tells me there is more upside ahead.

According to Brad Hoppmann  “JR Crooks is on fire! Last week he closed his latest gold play for a potential 90% gain, his latest oil recommendation popped over 55% in one week and his new commodity play is up close to 20% in just 2 days! Click on Natural Resources Options Alerts to watch a trading video about the “E3” system that JR Crooks is behind (advertisement – Ed)