Is The Oil World In Panic Mode? 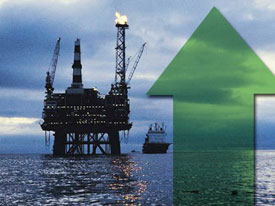 Oil markets have shown tremendous weakness in recent days, losing nearly seven dollars before rallying back a bit on Thursday. What’s causing it? Market analysts have been struggling to find a single reason for it, preferring to cite a cocktail of negative news and rumor to explain the downdraft.

There have been reports of increased Saudi production to Asian customers, which many cite as a breaking of the dam of OPEC production guidelines – a break that would have many in the oil world in full panic mode.

But I don’t see these promises as a collapse inside the cartel. The Asian contracts are merely adding stability to the oil markets in front of the threats of renewed U.S. sanctions on Iran. It’s been made clear that the Iranians won’t stand for any production increases that are over and above the agreed upon increases at their Vienna meeting last month – and equally clear that the Saudis don’t want to put that production agreement in jeopardy either.

Many analysts are pointing to the reopening of Libyan oil ports to explain the quick drop in oil prices.

But I also don’t find this explanation very compelling either: Even with these newly cleared impasses, Libyan exports are only marginally increasing, and most experts believe that Libyan production will continue to slide downwards through the rest of 2018. Others have cited the threat of slowing oil demand from China, but these predictions of slowing Chinese growth are as frequent, and usually as wrong, as dandelions growing in an open field.

I am a student of the financial players and their influence into oil prices, and generally look at the movement of speculative money in and out of the futures markets. But even here there hasn’t been a discernible reason for oil’s latest drop. According to the COT reports, long positions have actually held fairly steadily through this latest 7 dollar downdraft in oil.

So – WHAT IS IT? Despite the varied answers that are appearing in the media for oil’s recent drop, I can find only one convincing reason that oil is recently acting poorly despite being one of the most fundamentally bullish oil markets I have seen in my 35 years trading it…

Commodities are different than stocks. They are time-sensitive instruments that regenerate and self-destruct every month. Current September commodity futures contracts don’t care where the markets will be in 6 months. They only care about their price prospects on the day they expire – the 28th of August. Because of this, they are far more sensitive to current threats than stocks and have been responding to the disastrous economic threat of a continuing trade war between the US and China (and our allies).

Corn is down. Soybeans are getting pummeled. Doctor Copper is giving us a nasty prognosis; Industrial metals like Zinc, Tin and Platinum are down anywhere from 15-35 percent.

Oil, for most of the run-up to US tariffs starting in late May, has strongly bucked this general commodity collapse – proving again just how fundamentally strong it is – but even that fundamental strength is no match for the destructive economic force of a global trade war.

Recently, there have been signs that Congress, and specifically the Republican party, are willing to break with the President on this self-destructive path towards ratcheting tariffs and reciprocal penalties. They’ve called on Treasury Secretary Mnuchin to answer questions about the legality and exit strategy of tariffs, and various Congressional leaders have been suggesting legislation to put a stop to it.

There has been a general belief that the Trump trade war will have to be abandoned at some point, as markets outside the commodity sphere begin to respond. When consumer prices begin to sharply increase, and jobs begin to be lost, most believe the President’s political needs will intersect with his self-destructive tariffs.But until that happens, it’s difficult to continue to recommend oil or other commodity stocks. It’s even more difficult to predict when the green light to buy them will return. Nothing has been as tough to forecast as the plans of President Trump’s administration.