Is the Nikkei telling us the US dollar “correction” is over? 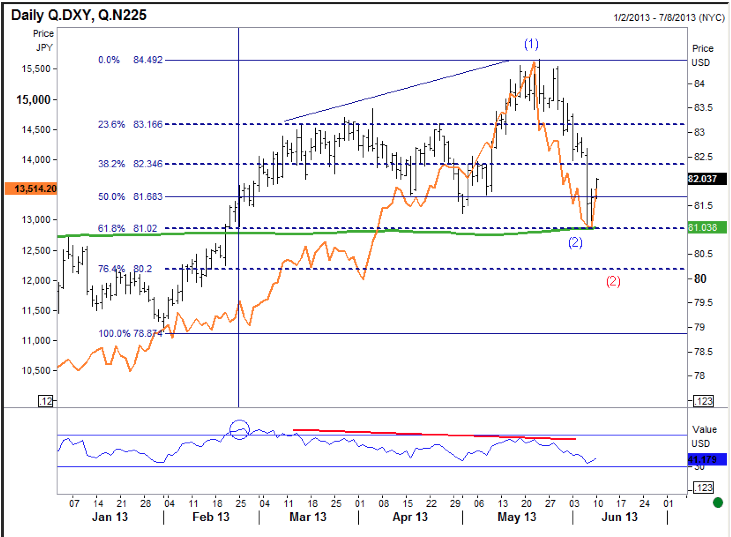 There has been a tight correlation between the path of the Japanese stock market and the US dollar of late. The Nikkei surged 4.94% overnight. This kind of move suggests the Japanese stock bulls are back in town. Technically, the Nikkei appeared a bit “oversold.” And fundamentally, this surge coincided with good fundamental news (price action confirmed by the news):

Bloomberg 6/10/13: Gross domestic product expanded an annualized 4.1 percent, compared with a preliminary calculation of 3.5 percent, the Cabinet Office said in Tokyo today. Nominal GDP, which is unadjusted for changes in prices, rose 0.6 percent from the previous three months, leaving the economy 7 percent smaller than in the same period in 1997. Consumer confidence in May was at its highest level since 2007, a Cabinet Office survey showed.

Here is a look at the US Dollar Index (black bars) versus the Nikkei 225 Index (orange line): Notice the 200-day moving avage (green line) and the 61.8% retracement level in the US dollar index appear to represent support at the moment fro the buck at the moment. And in case you didn’t realize, there is also a tight correlation between the Nikkei and $-yen currency pair, i.e. as stocks strengthen in Japan, the yen weakens (USD/JPY rallies). For some perspective on the Nikkei, a monthly chart going back to the peak in 1989 when it peaked near 40,000. I am not saying we see 40,000 anytime soon, but if more local Japanese investors and international players believe in Abenomics is for real, this market could surprise even the bulls. The next chart resistance level, using the Sperandeo trend line approach, comes in at 18,295; that’s an increase of about 35% per cent from current levels. Hmmm… Stranger things have happened.

“In the midst of increasing mechanization and technological organization, propaganda is simply the means used to prevent these things from being felt as too oppressive and to persuade man to submit with good grace.” – Jacques Ellul, Propaganda