Is The Gold Bear Market Really Over? 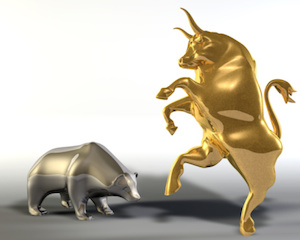 I have made no effort to hide the fact that I am very bullish of gold.  I am, after all, writing this for a site called GoldStockBull, and in fact mydebut submission to the site was a piece in which I make the case for $10,000/oz.+ gold.

But just because I am bullish long term doesn’t mean I don’t think that the price can drop further.  Now generally I am reluctant to make shorter term trading predictions because that’s not the sort of analysis that interests me, yet I think there are various signs that indicate that gold bulls may have to endure one more capitulation to the downside before the next leg of the bull market begins.  In what follows I will point these signs out for the reader, and I will follow them with some investment strategies.

What Could Send the Gold Price Lower?

Gold has experienced two significant corrections since the bull market began at the turn of the century.  The first was in 2008 and the second began in 2011 and many investors believe ended at the end of 2013.  One thing that differs……continue reading HERE