Is Silver Good As Gold? 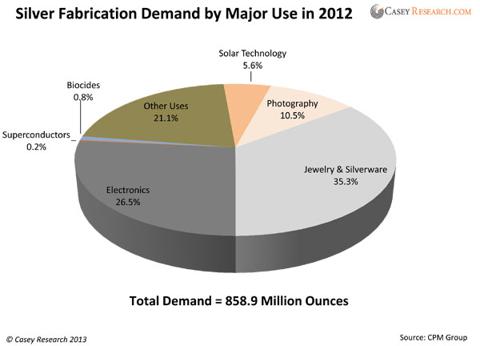 Much has been written about the myriad industrial applications for silver, and even more since announcements from China and Japan of plans to accommodate increased reliance on solar power by 2015 in satisfying their growing energy needs.

Last month, according to Jeff Clark of Casey Research:

China raised its target for solar generating capacity to more than 35 gigawatts (G W) by 2015, a stunning increase of 67% above its previous target.

Take note: I am not a financial planner, adviser, accountant, economist or alchemist. I started investing late and I’m not a millionaire. I am a logical thinker looking for answers. I won’t spin a bunch of numbers, won’t argue shrinking global mine output, and I will not talk Fed money printing, however this article does intend to make a case for silver surpassing gold in future demand.

I know, you might think I wear a tin foil hat, but add this to your thought process. Silver remains the most reflective, heat resistant and electrically conductive material on earth. Its beauty and resilience makes it perfect for jewelry, and the shiny metal enjoys rising popularity among retail investors because of its close relation to money and value as a hard asset.

Silver has something special going for it

The Casey Research chart below does not include future silver demand associated with the new solar panel initiative. It only illustrates industrial demand in year 2012.