Is Deutsche Bank the Next Lehman? 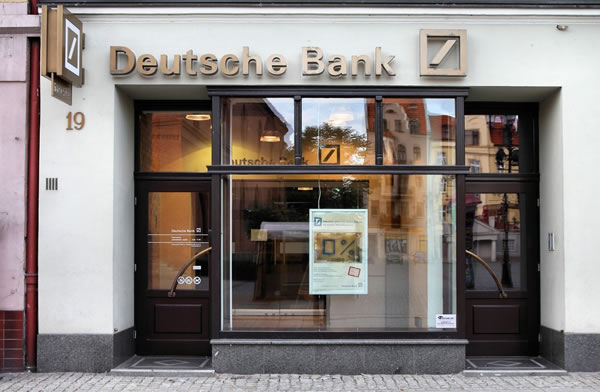 Has the crash begun? The similarities between the current market environment and those seen in the 2008 economic crisis are scary to say the least. Investors are panicking and for good reason – signs that another Lehman-style crisis may be on the horizon.

Deutsche Bank is the one in question. This German banking powerhouse has had its liquidity called into question and is now on the fence, being attacked from all sides as article after article is released pointing to the dangers the bank now finds itself in.

As we reported yesterday, this uncertainty had a dramatic effect on the stock price of the bank, causing it to crash by 10%, dragging it down to levels not seen since the last economic crisis.

The immediate risk that has so many investors on edge is the fact that Deutsche Bank has €350 million in maturing Tier 1 coupons due in April, and even more in the future. The question of whether they will be able to repay this is what has investors so worried.

The attacks have been so fierce and so successful that Deutsche Bank has been forced to issue a press release defending their positions and the fact that they do have the liquidity to meet debt demands in 2016 and going forward in 2017:

The final AT1 payment capacity will depend on 2016 operating results under German GAAP (HGB) and movements in other reserves.

The most worrisome aspect of this press release is the fact that the 2017 projections do not take into account the recent significant losses that the bank experienced in 2016. This means that they are in a much worse position than they were, but whether or not it will affect them in a major way going forward is yet to be seen.

This is just another similarity to the 2008 economic crisis, as that was the last time a major developed market bank was forced to defend itself in such a manner.

Going forward, we can expect the German government to step in and attempt to stave off further collapse of the Deutsche Banks stock price and stem the outflow of liquidity. Banning short selling and jaw boning aplenty are just some of the first steps that we will see.

As in the past, Central Banksters, politicians, and the media will continue to report that all is well, nothing to see here, move along. Yet, there may be no looking back now. This can of worms has been opened and there may be no putting the lid back on – the contagion will spread.