Investors have a growing appetite for gold in 2017 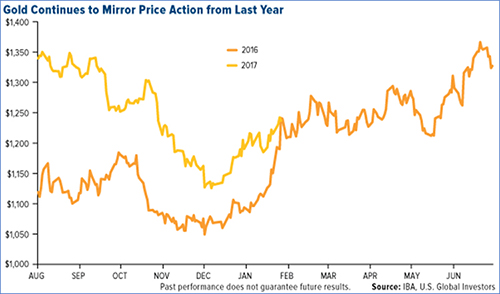 Force #2: Massive money printing, not by the Fed, but by the European Central Bank and Bank of Japan.

This year, political concerns are Trumping the fundamentals, literally, and pushing gold prices higher amid growing policy uncertainty here in the U.S. and especially in Europe.

Here at home, we have a new president who has outlined some very pro-growth policies, but Trump has been short on the details. And the devil is always in the details. Meanwhile in Europe, Brexit is moving forward as the U.K. prepares for life outside the European Union.

And major elections taking place this year in France and the Netherlands will create even more populist pressure for others to exit the EU, and pronto. Markets are already getting nervous about the growing wave of populism around the world, and that’s keeping a firm bid under gold.

So far this year, gold is pulling off a repeat performance of its trend in 2016. In fact, if you compare the trend in gold over the past six months, to the path it followed last year, the pattern looks eerily similar. Of course, history never repeats exactly, but it often rhymes. If this pattern holds up — and my own neural net AI forecast charts suggest it will — then I expect gold to enter a mostly sideways trading range, including a correction in the months ahead, which could retest the $1,200 level or a tad lower on the downside.

The real story, however, is not in the yellow metal itself, but in the action of gold mining stocks. I expect this is just the beginning of a major move higher for gold and silver stocks — especially the smaller, junior mining shares. Gold and silver stocks should easily outperform precious metals’ prices to the upside in the years ahead, as gold inevitably skyrockets to $5,000 or more.

Right now, investors have already caught on to the outperformance of gold mining stocks, making this a dangerous time to put new money to work in the miners. Let me explain why …

Last year was a good year for gold ETFs, with investors piling into these funds. Record net inflows of $24 billion during 2016 surpassed the previous high of $22 billion in 2009, even after flows reversed briefly post-election, with $8.4 billion of outflows in November and December 2016.

In January alone, another $320 million flowed into ETFs that track the price of gold. And the VanEck Vectors Junior Gold Miners ETF (GDXJ) attracted even more, $650 million of net money flows over the past month.

The trouble is, retail ETF investors are almost always late to the party. And they’re likely piling in now, just before gold enters a corrective phase, as I have forecast.

Bottom line: Expect a better buying opportunity in gold and mining stocks AFTER a near-term correction, which should take place between March and May.