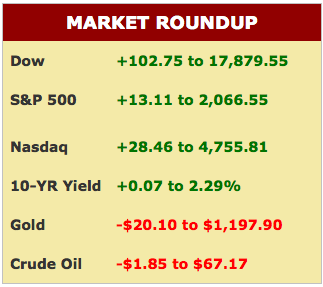 “At some point though – in any market – you reach a capitulation point. Panic selling gets so intense that everyone who wants to sell already has.” Setting “the stage for massive (and potentially very profitable) reversals”- Mike Larson

Energy, Rates and the End of Panic Selling?

Look, you know by now that OPEC didn’t cut production at last week’s meeting in Vienna. That helped pull the rug out from under crude oil prices, sending U.S. oil futures to just under $64. We haven’t seen prices that cheap since mid-2009 – right after the Great Recession!

You probably know that interest rates have generally been heading lower in 2014, too. Not because of economic weakness or policy here, mind you. The U.S. economy just notched the strongest six months of growth since 2003, while the U.S. Federal Reserve just ended its QE money-printing program.

But that hasn’t mattered as much as it normally would because Europe, China and Japan are all struggling and printing money like mad. Those massive waves of money aren’t staying bottled up at home or helping their domestic economies – they’re washing up on our shores and boosting U.S. stocks, bonds and the dollar.

At some point though – in any market – you reach a capitulation point. Panic selling gets so intense that everyone who wants to sell already has.

When selling does dry up like that, it sets the stage for massive (and potentially very profitable) reversals … the kind you only see every few years!

With that in mind, I want you to look at the following two charts. The first shows the yield on the 10-year Treasury Note, while the second shows the Energy Select Sector SPDR Fund (XLE): What do I see? I see large, panic-driven, waterfall declines. Those declines sent the 10-year yield down to 1.87 percent from around 2.65 percent, and the price of the XLE down to less than $78 from just over $101.

Then they both culminated in massive, spike lows in mid-October. A sharp rally ensued, followed by a “re-test” of the lows in the past couple of days. On those re-tests, we saw lighter volume, less selling, and higher lows in price.

My colleagues Mark Najarian and Mandeep Rai discussed the fundamental forces impacting oil yesterday. But even if you didn’t know one whit about the fundamentals of oil or interest rates, the technical action here is very encouraging.

It suggests we are, in fact, washed out. We may have gotten to a point where both interest rates and energy stocks have priced in all the potential negative news, setting the stage for one of those very sharp reversals I mentioned earlier.

So if you’ve been biding your time, looking for an entry point in either of these markets, pay close attention. It may just be about time to pounce! Everything from inverse ETFs that rise in price when interest rates climb to select, energy stocks or Master Limited Partnerships focused on the domestic energy renaissance would be my favorite vehicles.