Interest Rates Are Surging All Around Us 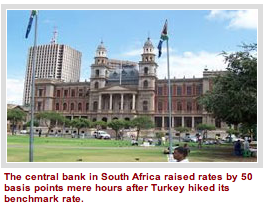 First things first: The Federal Reserve did exactly what I predicted, before it was fashionable to predict it. They agreed to lop another $10 billion off the QE bond-buying program at this week’s meeting, slashing it to $65 billion.

Policymakers also strongly implied they will continue to reduce their bond buying going forward. That step, in turn, sets the stage for actual short-term interest rate hikes. I continue to believe those will begin earlier than most market players believe, and I would start preparing for them.

But what the Fed did this week is nothing compared to what happened elsewhere in the interest rate markets.

Just imagine that you woke up one morning and the Fed had jacked interest rates up by 425 basis points overnight. That’s 4.25 percentage points — enough to raise the federal funds rate from its current 0 percent to 0.25 percent range to around 4.5 percent.

If you’re not already aware, the overnight rate serves as a benchmark for the prime rate. And the prime rate is the benchmark that many variable rate loans are tied to. So if you had a variable rate credit card at the Bankrate.com national average rate of about 11 percent, it would almost immediately surge to 15.25 percent. Your home equity line of credit? Its rate would surge from around 4.8 percent to just over 9 percent.

Any variable rate business loans you might have outstanding? Up, up, up!

With longer-term mortgages, there’s no telling exactly how much rates would go up because they don’t move on a 1-to-1 basis with overnight rates. But it’s a safe bet that they would rise at least 100 to 200 basis points.

Why am I bringing all this up?

Because the Turkish central bank was just forced to hike its overnight rate to 12 percent from 7.75 percent. It also had to more than double a separate overnight borrowing rate to 8 percent from 3.5 percent. So you can only imagine how the local economy there is going to react.

More importantly for a U.S.-based investor is the reason behind the move, and what it signifies for the year ahead. Turkey’s currency is the lira, and it has been falling sharply for weeks because of political turmoil and concern over the nation’s ability to finance its current account deficit.

Emerging market nations with yawning deficits need constant inflows of foreign capital to finance them. So if anything spooks foreign investors and causes them to pull back, things get real ugly, real fast. The currency plunges, the markets tank, and the central bank is often forced to implement capital controls or jack up interest rates to a level high enough to stem the outflows.

The problem is that those hikes can also drive a stake through the heart of the domestic economy. After all, if you woke up and the required monthly payment on a home mortgage had just soared by almost $400 overnight, what would you do? Chances are you’d shelve your home buying plans in a heartbeat!

Turkey is far from alone. Investors have been focusing like a laser on a “Fragile Five” bloc of nations — Turkey, Brazil, India, South Africa and Indonesia — that are in a similar bind. Their currencies and stock markets have all come under pressure amid capital concerns, and their central banks have generally been responding by raising interest rates for the past several months.

In fact, the central bank in South Africa raised rates by 50 basis points mere hours after Turkey hiked its benchmark rate. The increase pushed the rate to 5.5 percent from 5 percent, and it was the first hike going all the way back to June 2008.

What started the ball rolling? Why have emerging markets been under so much pressure?

It all goes back to the Fed. The ongoing rollback of QE — and the interest rate hikes in the U.S. and other developed nations that are likely to follow — are causing investors to rethink their emerging market exposure.

You see, one key reason so much money flowed out of the U.S., U.K. and the euro zone and in to emerging markets is because yields were artificially suppressed for so long in developed economies. Investors were forced to “chase yield” wherever they could get it, and the available yields in emerging markets were just too juicy to pass up.

Just like with interest rates, you ultimately hit a “tipping point” with these kinds of emerging market crises. Things get bad enough, and go on for long enough, to lead to widespread selling in almost all assets, even those that have absolutely nothing to do with any of the “Fragile Five.”

I don’t think we’re at that stage yet, in large part because the domestic economy is in better shape than it has been for the past few years. But you can rest assured I’ll be watching to see if anything changes — and will do my best to let you know what all these new developments mean for your investments.

The investment strategy and opinions expressed in this article are those of the author’s and do not necessarily reflect those of any other editor at Weiss Research or the company as a whole.

About Money and Markets
For more information and archived issues, visit http://www.moneyandmarkets.com
Money and Markets is a free daily investment newsletter published by Weiss Research, Inc. This publication does not provide individual, customized investment or trading advice. All information is based upon data whose accuracy is deemed reliable, but not guaranteed. Performance returns cited are derived from our best estimates, but hypothetical as we do not track actual prices of customer purchases and sales. We cannot guarantee the accuracy of third party advertisements or sponsors, and these ads do not necessarily express the viewpoints of Money and Markets or its editors.