Posted by Rick Mills- Ahead of the Herd 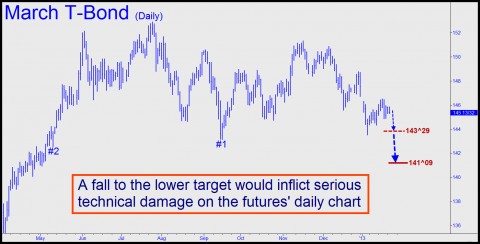 Are T-Bond futures breaking down?  It’s important that we get it right, since, if they are and market forces are about to lay bare the biggest financial shell game in history, we want to be watching from the sidelines when the inevitable panic erupts.  From a technical standpoint, the key number to watch is 143^29, a “Hidden Pivot” derived from our proprietary runes. If this support were to fail we would infer that the selloff had significantly further to go, presumably to at least 141^09, before bulls would have a chance of reversing the tide. By then, however, it could be too late to calm the herd. Interest rates on the long bond would be up by about 25 basis points, to around 3.25 percent, and although that would still be shy of the 3.50 peak recorded last spring, it could suffice to unsettle equity markets and squash a a delicate uptick in real estate that has relied on massive infusions of credit created out of thin air by the Federal Reserve. At the very least, it would give pause to share buyers who have so far gotten 2013 off to a rousing start. To be sure, T-Bonds have pulled out of tail spins before. Early in 2011, they reversed a nasty decline that had threatened to derail the banking system’s recovery from the Great Financial Crash.  And they did so again later that year, saving the day for a mortgage market that might easily have relapsed. This time, however, although T-Bond futures are not in a steep decline, weakness has persisted since summer. Because of this, the markets are in poor shape to withstand whatever shenanigans Obama and the Democrats attempt to pull in lifting the debt ceiling.  In fact, the carelessness with which the subject is being debated on Capitol Hill could itself be the catalyst that finally causes T-bonds to “revolt” as buyers other than the Fed itself desert the Treasury’s auctions. We should all want to be long gold and silver when that day finally arrives, as it inevitably must.

Whatever happens, we’ll be watching the charts closely when the March T-Bond contract comes down to 143^29, an occurrence that we would rate as all but certain over the next 2-3 weeks. A breach of that “hidden” support by more than two or three ticks —  or still worse, a close beneath it — would be warning of worse to come.   Click here for a no-risk trial subscription toRick’s Picks that will give you access to our analysis in real time, as well as to a 24/7 chat room that draws experienced traders from around the world.

[Click here for a free trial subscription to Rick’s Picks that includes access to a 24/7 chat room and ‘Harry’s Place’.]