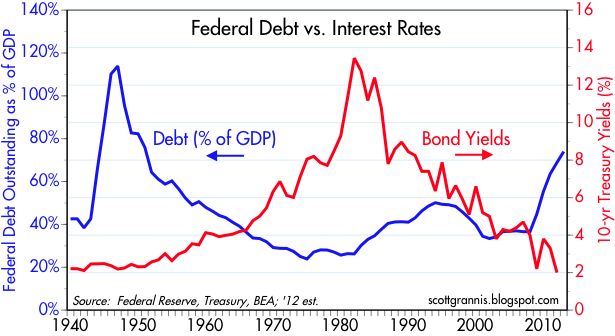 The transition from a levering, asset-inflating secular economy to a post bubble delevering era may be as difficult for one to imagine as our departure into the hereafter. A multitude of liability structures dependent on a certain level of nominal GDP growth require just that – nominal GDP growth with a little bit of inflation, a little bit of growth which in combination justify embedded costs of debt or liability structures that minimize the haircutting of or defaulting on prior debt commitments. Global central bank monetary policy – whether explicitly communicated or not – is now geared to keeping nominal GDP close to historical levels as is fiscal deficit spending that substitutes for a delevering private sector.

Yet the imagination and management of the transition ushers forth a plethora of disparate policy solutions. Most observers, however, would agree that monetary and fiscal excesses carry with them explicit costs. Letting your pet retriever roam the woods might do wonders for his “animal spirits,” for instance, but he could come back infested with fleas, ticks, leeches or worse. Fed Chairman Ben Bernanke, dog-lover or not, preannounced an awareness of the deleterious side effects of quantitative easing several years ago in a significant speech at Jackson Hole. Ever since, he has been open and honest about the drawbacks of a zero interest rate policy, but has plowed ahead and unleashed his “QE bowser” into the wild with the understanding that the negative consequences of not doing so would be far worse. At his November 2011 post-FOMC news briefing, for instance, he noted that “we are quite aware that very low interest rates, particularly for a protracted period, do have costs for a lot of people” – savers, pension funds, insurance companies and finance-based institutions among them. He countered though that “there is a greater good here, which is the health and recovery of the U.S. economy, and for that purpose we’ve been keeping monetary policy conditions accommodative.”

My goal in this Investment Outlook is not to pick a “doggie bone” with the Chairman. He is makin’ it up as he goes along in order to softly delever a credit-based financial system which became egregiously overlevered and assumed far too much risk long before his watch began. My intent really is to alert you, the reader, to the significant costs that may be ahead for a global economy and financial marketplace still functioning under the assumption that cheap and abundant central bank credit is always a positive dynamic.