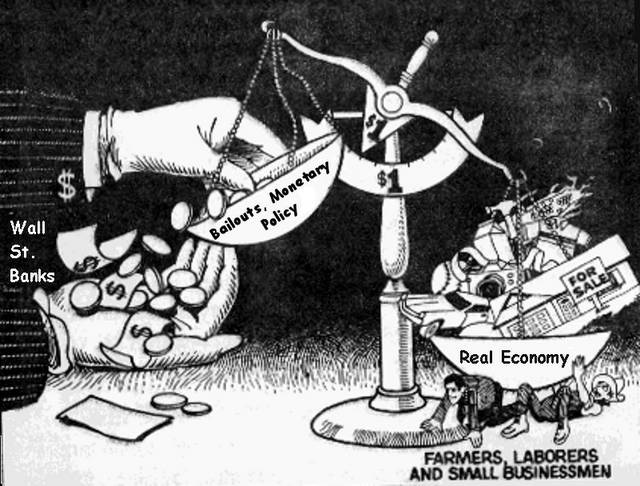 The world has gone mad. That’s in the financial and political markets.

The media are going on about the passions unleashed by each candidate. In getting hit for the first time with a resounding “No!”, the belligerent Left is in shock. Ordinary Americans getting involved is a very defensive move. Justifiably so. Those who call for less government under traditional constitutional limits are called – and get this – “Nazis”. The following by Tocqueville is elegant:

In the financial markets and with seemingly unlimited power, central bankers have been as reckless as the wildest of individual speculators in history. The difference is to compare longevity to ephemeral. In the US, the agent of rigging markets began quietly with the imposition of the Federal Reserve System in 1914. In the last twenty years, the intrusion has come remarkable. And the recent increase in intensity of intrusion is vividly confirming that the theories are not working. The next credit crisis will severely reduce belief in central banking. That would be for those outside the system who have been the innocents. Many central bankers, who have been the instigators of instability will suddenly lose belief in their own powers.

That a central bank bent on intrusion would work is, itself, a speculation.

The problem is getting bigger. There have been no forces of correction within central banking to temper ambition.

Lately, the Fed has been attempting to provide unlimited funding for an experiment in unlimited government. The experiment has transferred huge amounts of money and power from the “makers to the takers”.

That there has been no material increase in take-home pay in over 20 years is explained by the necessity of funding state ambition. Alternately, self-government has to be thrifty.

Those pandering to and living off of the avails of big government have run into an increasingly determined “No!”. The reaction is yet more strident pleadings to continue the privilege of “managing” the economy and “managing” the climate. Both are examples of bureaucratic audacity, without precedent.

Hard times have prompted popular uprisings that have been well-documented back to some 4000 years ago in Egypt. In the 1970s, Barbara Bell published her thesis that dynastic changes in Ancient Egypt were prompted by diminishing floods and consequent food shortages. Of course, in an authoritarian system, the governing classes controlled food supplies.

Security was provided by armed palace guards. Not of the governing classes, their sympathies were ultimately with the people, As conflict became acute, the guards laid down their spears. Historians called it interregnum, but it was a period of relative freedom and reduced privilege.

Anyone who had read Bell’s thesis noted the days in East Germany in 1989 when the border guards laid down their AK-47s so the folks could go “cross border shopping”. Dictator Honecker had to repeal the law obliging the state to murder Germans for violating borders.

Recorded since the early Middle Ages, local famines provoked “peasant bread riots”. It wasn’t until the very authoritarian 1500s when, as Durant described it, a typical peasant bread riot turned into an “Iconoclastic Rebellion”. The uprising was against the very nasty government of the Spanish Netherlands. Much troubling, worthy of mention but it did not force specific reform. That took most of the 1600s.

US governing classes are now giving a practical civics lesson on the importance of a constitution that limits the ambition of government. The lesson is that when the political movement is very compelling, the constitution is bypassed in another great experiment in authoritarian government. This is becoming too intrusive and expensive. Enough to prompt ending action, otherwise called reform.

Recent political turmoil should not prompt the conclusion that Americans are ungovernable; the problem is that the governing classes have become ungovernable.

A modern “bread riot” by the “deplorables” is underway. But the governing classes are well protected from reform. This is not by the military or police. This time around, the palace guards are the Main Stream Media, who are of the governing classes. While they don’t have spears or AK-47s their stonewalling will continue to defy reform.

The last Great Reformation occurred in the early 1600s. This was inspired by massive corruption and defended by an essentially state-controlled media. In 1632, England’s Star Chamber banned all “news books”. You get the concept. The uprising then had its printing done in Holland.

Fortunately, declining costs of printing and the rising prosperity of the middle classes launched a massive change whereby every agency of coercion was examined, then discarded or improved. Science became unpoliticized and became, well, science. The Earth was again permitted to rotate around the sun.

A similar reformation is building now. Is it urgent enough to favour the GOP which is being reformed?

Don’t know, but Trump is not the risk; the continuation of corrupt government is.

Deflating asset prices will soon begin to restore sanity to the financial markets. Sanity in the political markets will slowly follow. We will reserve judgement on central banking.