INSIDE: HOW TO AVOID LOSING YOUR SHIRT! 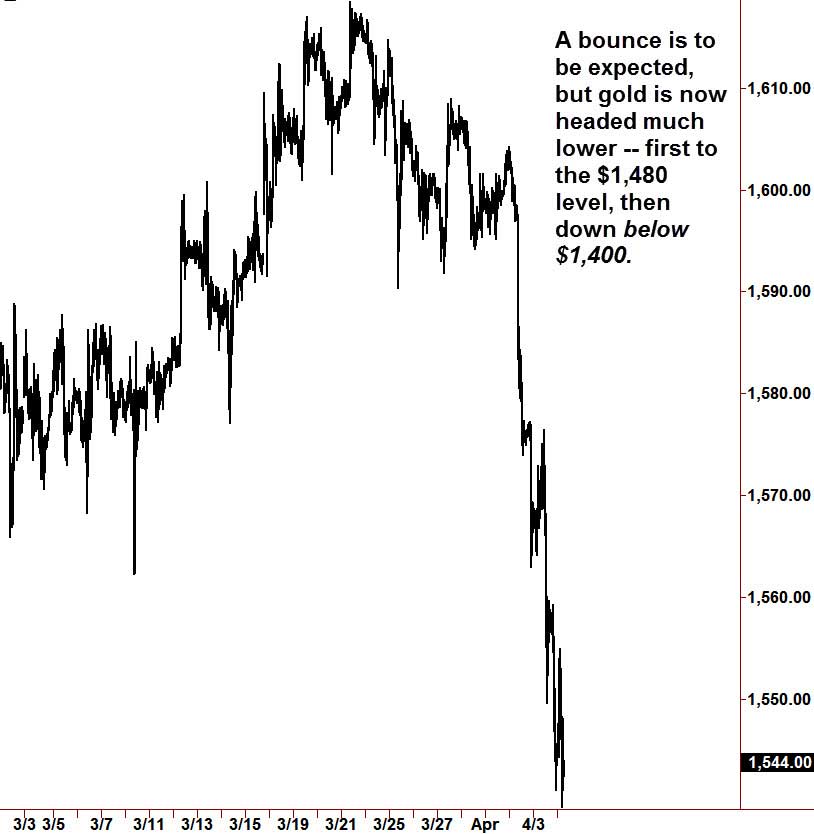 Last week, I told you about the hundreds, if not thousands of readers that wanted my head for remaining bearish on gold and silver.

Well, gold and silver have taken the shirts off the backs of loads of investors and analysts who refused to listen to me! Why are traditional safe-haven assets plunging when there are so many problems in the world?

In a nutshell, it’s because they’re not safe-haven assets right now.

I can already hear my email inbox beeping like crazy over that statement. I’ll be accused of treason.

But the simple fact of the matter is that for a variety of reasons, other asset markets have now become safe havens. Namely, the dollar and U.S. equities.

And that’s because right now, there are other overriding concerns on investors’ minds.

First off, there are the new and justifiable fears of confiscation, set off by the Cyprus event. If your deposits in a bank aren’t safe, then how safe could gold be? After all, it was confiscated once before by Roosevelt.

Second, almost the entire world already knows that the sovereign bond markets of Europe and the United States are just about the worst investment one can make.

Stop there. Money deposited in a bank is not safe. Money invested in a European or U.S. sovereign bond is not safe, and no yield to speak of either.

Third, is there safety to be found investing in the euro? Hardly!

Is there safety to be found in the Japanese yen, which is actively and aggressively being devalued? Hardly!

Is there safety to be found in the Chinese yuan, which just hit a 19-year high against the U.S. dollar? Perhaps there is longer-term. But right now the yuan is not international enough and not liquid enough to handle the amounts of capital that are on the move.

So then, what and where is the best place to put your money today? It has to be an investment that is …

1. Extremely liquid and can handle huge amounts of investment.

3. Offering at least some sort of chance to generate a decent income.

4. Denominated in a currency that is being, at least right now, less actively devalued than the Japanese yen and at risk of outright failure like the euro.

If you follow the above thought process through logically and unemotionally, you can now see why millions of investors, corporate fund managers and even corporate treasuries are opting to put their money into the U.S. dollar and the U.S. equity markets rather than just about anything else right now.

Of course, the above is an oversimplified explanation of the actual process underway now in the markets and the forces that are at work.

But it is precisely what’s happening.

Look, I love gold as much as any of you. Over the long-term there is no better store of value.

But gold (and silver) is a commodity just like any other. At times, its safe-haven aspect will shine, while at other times, other asset markets will perform that role.

And right now, the dollar and U.S. equities have moved to the forefront. That will change, and commodities will move back to the forefront with gold leading the way higher …

But it’s not likely to happen until investors fully realize that Washington is just as broke as Cyprus, Italy, Spain, Greece, France, and others. And that’s a ways off.

So Here’s What I Recommend …

FIRST, do NOT look to gold and silver for safety right now. Their interim bear markets are not over, not by a long shot. Ditto for mining shares.

While there are going to be the inevitable short-covering rallies and bounces, gold, silver, platinum, palladium, and mining shares are all headed lower.

SECOND, if you are loaded up with gold and silver and mining shares from much, much lower prices and you decide to hold through thick and thin to capture their long-term potential, then at least consider hedging.

THIRD, do not expect other commodities to rally right now either.

Copper is getting killed. Oil is now rolling over to the downside and has the potential to fall substantially. Grain markets are getting slaughtered. Soft commodities, such as coffee, sugar, and cocoa are also on the cusp of sharp declines.

FOURTH, stay in the dollar now. The dollar is in an interim bull market. One good way to play it is via the PowerShares DB US Dollar Index Bullish Fund (UUP).

Right now, the U.S. stock markets are due for a pullback. But the Dow Industrials gave me a very powerful long-term buy signal at the end of March. After the pullback passes, I expect the Dow to work its way up to near, or slightly above the 18,000 level ? possibly by early summer. Consider well-capitalized real estate investment trusts and the like that spin off income.

And if you’re in the market for your first home, or a second home, now is a great time to buy and finance it at historically low mortgage rates, but do not finance with anything other than a fixed-rate mortgage.

If you’re super wealthy, look at some other asset markets too ? such as diamonds, art work, and numismatic coins. I am not an expert in any of them, but from a broad macro trend point of view, they are likely to skyrocket higher as safe havens for the super wealthy.