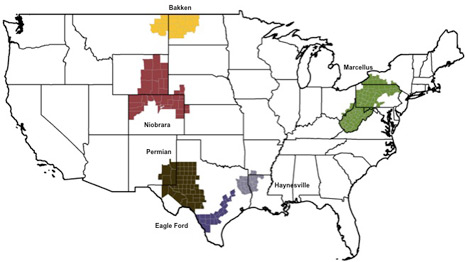 Fewer rigs but more wells per rig proving powerful combination, among other new tricks of the trade.

In the world of fracking, the last few months have been significant on a number of counts. Two, in particular, were indicative of just how important fracking really has become in the U.S. The first DPR came up with some interesting findings. First, vis-a-vis natural gas, while production increased in four out of the six regions over the past year, the Marcellus region accounted for some 75 percent of growth across all six regions. Second, vis-a-vis oil, the Bakken and Eagle Ford regions accounted for around 75 percent of monthly oil production growth. Third, and perhaps most interestingly, it appears that, rather than an increase in the active rig count, the “main drivers of the increases in domestic natural gas and oil production have been improvements in drilling efficiency and new well productivity.”

The effect of these improvements was no more obvious than it was in the figures for oil production alone in the U.S. in October. During the month, for the first time since February 1995, the country produced more crude oil (7.7 million bpd) than it imported (7.6 million bpd). And in fact, according to Businessweek, “[i]mports have been falling dramatically,” with the “biggest declines … from countries that have traditionally been among America’s biggest crude oil suppliers. Monthly imports from Nigeria, for example, have fallen almost 90 percent since 2007.”