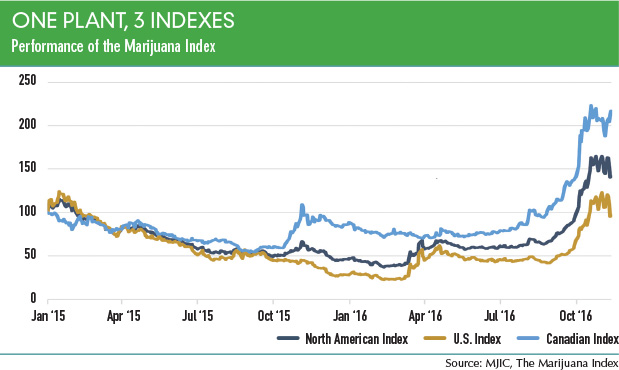 To be a legitimate market sector, you must have a benchmark to measure what qualifies as under- and over-performance.

A large debate that has grown in investing circles during recent decades is the ability for professional investors to provide “alpha” rather than simply “beta.” That they are adding value rather than just collecting the value provided by the broad market or a specific sector. Legitimate market sectors draw investors and those investors are being asked to prove their value not only versus the broad market but versus the particular sector or strategy group they are involved in.

So, if an emerging industry is going to attract professional investors, it will be asked to measure its performance versus a benchmark. The Marijuana Index, which is owned by MJIC, tracks the performance of the legal marijuana industry. This includes companies that directly handle legal marijuana, such as marijuana producers, processors, distributors and retailers. It also includes companies that don’t directly handle plant product, but cater to those who do, as well as to consumers. These “ancillary” businesses operate in a wide range of industries such as consumption devices, product packaging, information technology, equipment, business services and more, says Dan Nicholls, vice president at The Marijuana Index. “Our definition of marijuana includes all forms and applications of the marijuana, cannabis and hemp plant, including cannabinoids such as CBD or THC,” says Nicholls, adding that it does not, however, include activities related to synthetic cannabinoids.

MJIC breaks down the Marijuana Index into three indexes: The North American Index, American Index and Canadian Index (see “One plant, 3 indexes,” below). Currently there are 23 stocks in the overall index, 13 American and 10 Canadian (see “The roster,” below). MJIC recently reconfigured the index based on specific criteria. “The start of this year we revamped the index, putting in place strict eligibility criteria,” Nicholls says.

….much more analysis and charts HERE

…related, Mark Leibovit was in on Marijuana at the very bottom and recently took “Monster Profits”: