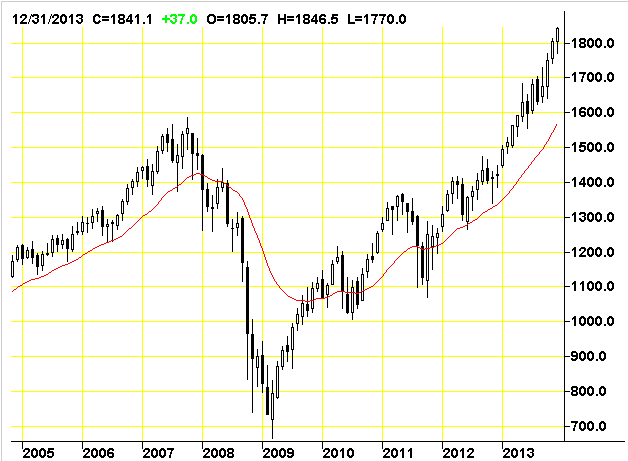 The ratio of nonfinancial equity market capitalization to nominal GDP is presently about 120%, compared with a historical average prior to the late-1990’s bubble of just 55%. The comparison – about double the historical norm – is about the same if one uses the Wilshire 5000, which includes financials, and for Tobin’s Q (price to replacement cost of assets). The price/revenue multiple of the S&P 500 is presently 1.6, versus a pre-bubble norm of just 0.8. All of these measures have a correlation of about 90% with subsequent 10-year S&P 500 returns, even including recent bubbles and subsequent busts.

Increasing our concern is a 10-week average of advisory bulls at 57.7% versus just 14.8% bears – the most lopsided bullish sentiment in decades. Add the record pace of speculation on borrowed money, with NYSE margin debt now at 2.5% of GDP – an amount equivalent to 26% of all commercial and industrial loans in the U.S. banking system. Add the currency collapses in Argentina and Venezuela, as well as fresh credit strains and industrial shortfall in China, and one has any number of factors that could be viewed in hindsight as a “catalyst” (as the German trade gap was viewed after the 1987 crash, in the absence of other observable triggers).