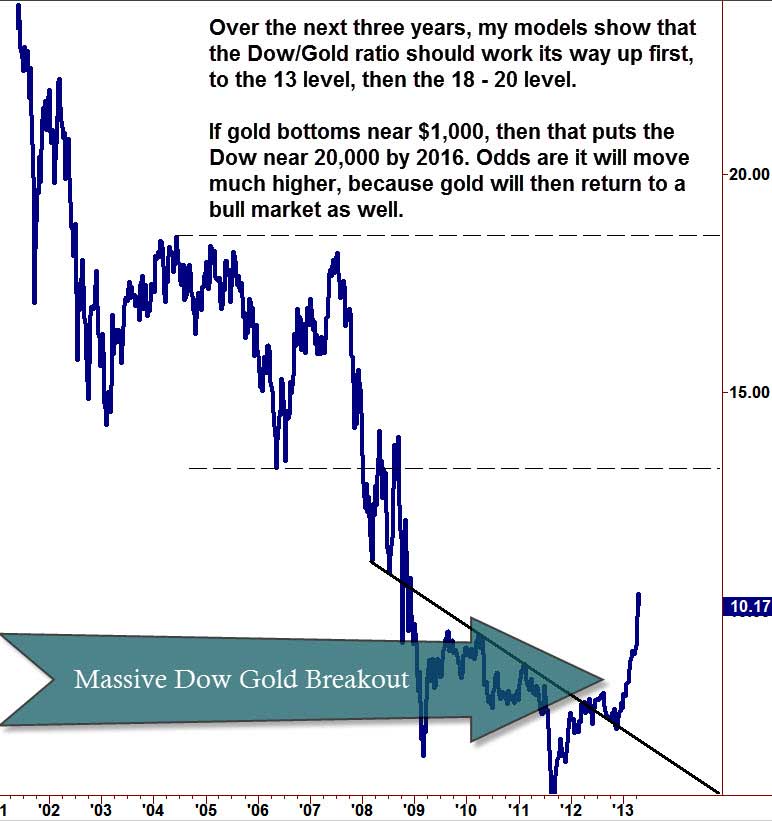 For a couple of years now I’ve maintained my view that the Dow Industrials and broad U.S. equity markets were entering a new bull market. One of the tools I used to come to that conclusion back in 2008 was the ratio of the Dow Industrials to the price of gold.

I wrote extensively about it in my July 2008 issue of Real Wealth Report. I also reported on it several times in other pieces I wrote. Today, I want to update the analysis for you.

First some background. At the peak of the ratio in the year 2000, the Dow Industrials would have purchased just over 51 ounces of gold. That’s because the Dow was at a high in real, inflation-adjusted terms, while gold was at its bottom at the $255 to $275 level.

In other words, in terms of gold — what I like to call “honest money” — the Dow Industrials had lost more than 87 percent of the entire equity bull market from 1980 to 1999. In my Real Wealth Report issue of July 2008, I called for the bottom in the ratio to come in around the 5 to 6 level.

It bottomed slightly above that level, then retested it with a slightly lower low in September 2011.

Since then, stocks have vastly outperformed gold.

As a result, the ratio of the Dow Industrials to gold has widened back out, and has broken out of a resistance level as you can see on the chart.

Now trading at about the 10-to-1 level, the Dow/Gold ratio is set to widen much further.

So what does this all mean? And what does it hold for the future for the Dow? For gold?

I’ll answer those questions now. But I urge you to put your thinking cap on, because the analysis of the Dow/Gold ratio is not easy to grasp, yet it’s critically important to understanding the future.

FIRST, the collapse in the Dow to Gold ratio was not caused simply by a crash in equity prices. It was also due to a crash in the value of the dollar, as reflected in the soaring value of gold from the year 2000 on.

SECOND, the breakout in the ratio means that the Dow is now beginning to inflation-adjust, to reflect the lower value of the dollar (as reflected in the higher price of gold).

This inflation-adjusting of equities is perfectly normal and one of the main reasons I am very bullish equities over the next several years.

All asset classes eventually recalibrate their price levels to the new reality of the purchasing power of the underlying currency, which in this case, is the dollar, which in turn, is nowhere near what it was worth back in the year 2000.

A simple exercise here will show you how the Dow will adjust. For the Dow/Gold ratio to climb back to the 18 to 20 resistance level you see on my chart, the Dow would have to explode higher to the 28,000 level, assuming gold’s current price of roughly $1,400. Do this exercise for any price level of gold you wish, and you will see that the downside risk in the Dow is minimal and the upside potential is enormous.

That’s not to say there won’t be pullbacks in the Dow. There will be. This kind of analysis simply shows you that …

THIRD, the monetary system has changed dramatically. More specifically, the dollar has lost another huge chunk of purchasing power ? value that it will most likely never get back, even if the dollar stages a rally in the Forex markets, as it has been doing and will do some more.

Naturally, the ratio between the Dow and gold will vary considerably over the next few years.

But given the breakout from the bottom of the ratio … and the normal tendency from all markets, no matter what they are, to retrace good portions of what they have lost …

I believe it’s a very safe assumption to make that the Dow/Gold ratio will continue to climb. And that means much higher prices to come for the Dow, and U.S. equity markets in general.

You can do this sort of exercise with any asset class you want. You can look at real estate values in terms of honest money, gold … even with collectibles such as art.

And each time you do that comparison, with the price of gold, you will find that the value of the dollar has changed dramatically over the last 12 years, so much so that almost all asset prices will eventually be forced to inflate much higher.

As for gold and silver right now, the bounce you’ve seen is nothing more than a dead cat bounce. The precious metals, and commodities in general, have NOT bottomed.

So please don’t buy yet, and don’t fall prey to the pitches from all the snake-oil salesmen out there who are trying so desperately to sell you metal and mining shares now so they can earn an extra commission.

I repeat my warnings:

Gold will not bottom until it hits major long-term support at $1,030.

Silver will not bottom until it tests major long-term support at the $17 level.

Continue to hold those positions!