#3 Most Viewed Article: Imminent: A Huge 17% Rally In Stocks 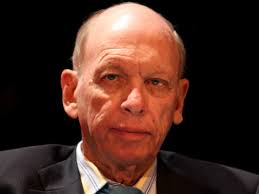 Byron Wien makes the case for another massive rally in stocks in his full analysis HERE. Wien spent 21 years as Chief (later Senior) U.S. Investment Strategist at Morgan Stanley and co-authored a book with George Soros. Below is a brief summary of his detailed analysis – Editor Money Talks

Byron Wien Makes The Case For Another Huge Rally In Stocks In his most recent market commentary, Wall Street legend Byron Wien lays out a sensible, reasonable case that the S&P 500 could climb to 2300.

“One of the problems limiting investor enthusiasm may be valuation. If the S&P 500 earns $115 in 2014, it is selling at 17.1x earnings. Market peaks have occurred historically at 25x–30x times earnings. On that basis, the market is fairly valued but not exceedingly expensive. The average trailing 12-month price-earnings ratio when the inflation rate is 0%–4% is 17… If the economy grows at a rate of 3% real during the remainder of the year and inflation is 2%, then nominal growth should be 5%. With productivity increases continuing and share buybacks, the S&P 500 should be able to show improvement of 7% over the $108 in operating earnings of 2013 and that would put us at $115. With considerable cash on corporate balance sheets, share buybacks should continue. Therefore, if earnings reach my target and the S&P 500 sells at 20x, we could reach 2300, which is 17% above the present level or more than 20% above the index price at the start of 2014.”

Wien also writes that, “Very few investors see that as a possibility because the market did so well in 2012 and 2013 and strong previous performance breeds caution about the future,” but says that just because the market performed well one year doesn’t mean it won’t the next.

In fact, Wien notes that when the S&P 500 has gained 25% in a year, it has been positive the following year each time has happened since 1990.

Overall, Wien’s primary concern for the market is a negative impact from geopolitical turmoil, saying that any of the situations in Ukraine, Israel and the Middle East flaring up further could pressure oil prices or challenge the “present world order” and unsettle financial markets.

But citing a recent Bloomberg poll that indicates 61% of respondents were worried about a market bubble, or thought the market was currently in one, Wien says this is an encouraging contrary indicator.

Wien says that of course, the market cannot go up forever, but writes: “I see neither a recession nor a bear market in sight even thought we are five years into the economic and market recovery. Let’s hope geopolitical turbulence doesn’t upset that outlook.”