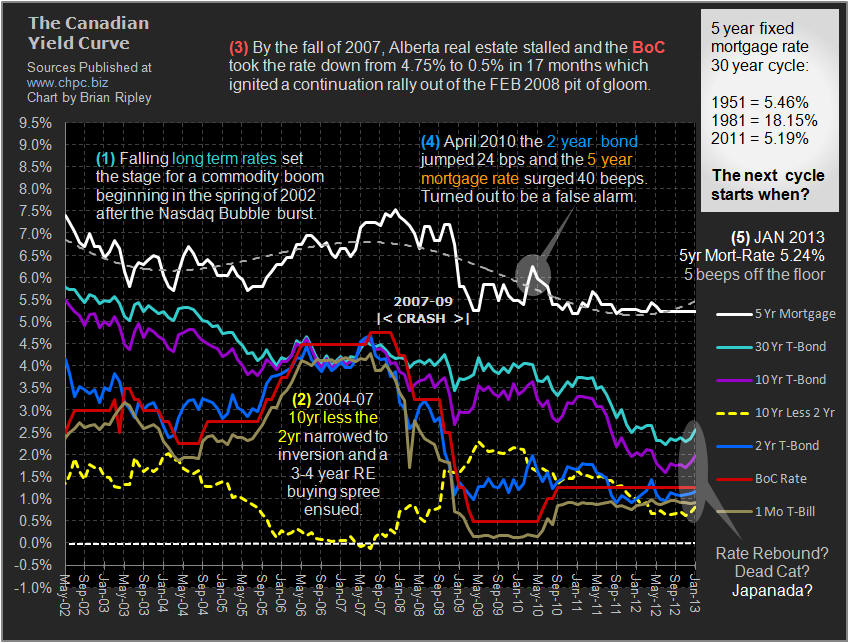 A cooling trend that has hovered over the real estate market for more than a year as the Teranet-National Bank index of Canadian housing prices continues to show.

“Our analysis suggests an overvaluation in real terms of about 10% at a national level, although with significant variations across provinces,” said Roberto Cardarelli, IMF mission chief for Canada, in comments provided as a complement to the technical report.

A new report says the cost of home ownership in most major Canadian markets was down slightly in the last three months of 2012 but notes that pressure on household budgets remains somewhat above the historical average.

“Home ownership costs came down for a second consecutive quarter as a share of household income thanks primarily to small declines in mortgage rates and home prices in several markets across the country,” the RBC report says. The chart above shows that in Janaury 2013 the spread between the Bank of Canada rate and the residential 5 year fixed mortgage remained unchanged as banks advertised the 5 year fixed mortgage rate at 5.24% and the BoC held its rate at 1.25% continuing to fix the cost of money and distorting market prices. The December CPI print remained at 0.8% so the short real rate also remained at 0.5%. Penny pinching ‘conservative‘ Canadian martyrs have been watching their savings evaporate while their fearless brethren have been all in for the big capital gain real estate flip. The Government policy of urging Canadians to borrow at low rates and spend at high cost (rather than promoting skill acquisition to become productive) has been a tax on savers and a short sighted policy; globally everyone is doing it, and it is not ending well. Look at Ireland, Spain and California (the list goes on). “ZIRP” could be the new normal and there is really no rush or panic to take on debt when asset prices are falling and rates remain boot suppressed. Notice how the TSX RE Index is correlating with the spread between the BoC and the 5 Year retail mortgage rate. If the spread between the BoC Rate and the 5 yr Mort-Rate widens as it did from April 2007 to Dec 2008, will the TSX Real Estate Index drop? Tension is mounting in the coiled spring as “real” rates continue to rise.