Posted by Mike Burnick via The Edelson Wave 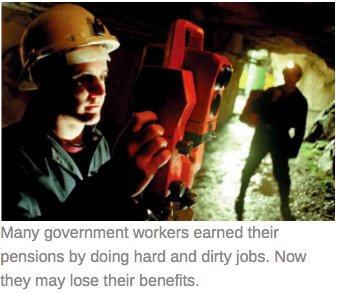 A report earlier this week revealed that Illinois isn’t paying the $9.1 billion annual interest payment on its pension debt.

You read that right: They’re not going to pay.

And it’s no wonder: As it stands, the Illinois state pension fund is underfunded by $130 billion. And likely to worsen if fund managers fall short of the 7% annual return that’s already baked into the cake.

Larry’s told you about the pension crisis in the past. And I knew it was bad in Illinois.

But not this bad.

Well then again, they haven’t had an annual budget for 19 months and they have accumulated $11 billion in unpaid bills.

What’s worse is that Illinois has the highest property taxes in the nation and the worst credit rating. As a result, residents are leaving at an alarming rate. And that’s crushing the tax base and pushing it toward decade lows.

Result: The debt spiral will get worse.

What are state legislators going to do?

The latest sign of desperation comes as lawmakers consider monkeying with the state constitution to allow for “restructuring.” But that looks like a stopgap measure at best, no ifs, ands, or buts about it.

Moving to the East Coast and the latest casualty: The New York Teamsters Road Carriers Local 707 Pension Fund ran out of money.

Result: A drastic reduction in benefits for its members.

One member who paid into the fund for 30 years began retirement with a $3,500 check. After the fund blew up, that monthly stipend plunged to $1,170.

No doubt about it, this is bad.

Also, on the precipice is the Central States Pension Fund, with an estimated 400,000 members across the U.S.

And the pension debacle across the United States will bring more benefit reductions and higher taxes when state and municipal plans go down.

In fact, some estimates indicate that 200 plans are on the fast track to insolvency, representing a mind-boggling 1.5 million to 2 million people.

Larry’s wave model shows that the pension crisis will accelerate this year and threaten your life’s hard work and wealth in its wake.