If The Fed So Much As Blinks, The Stock Market Will Collapse 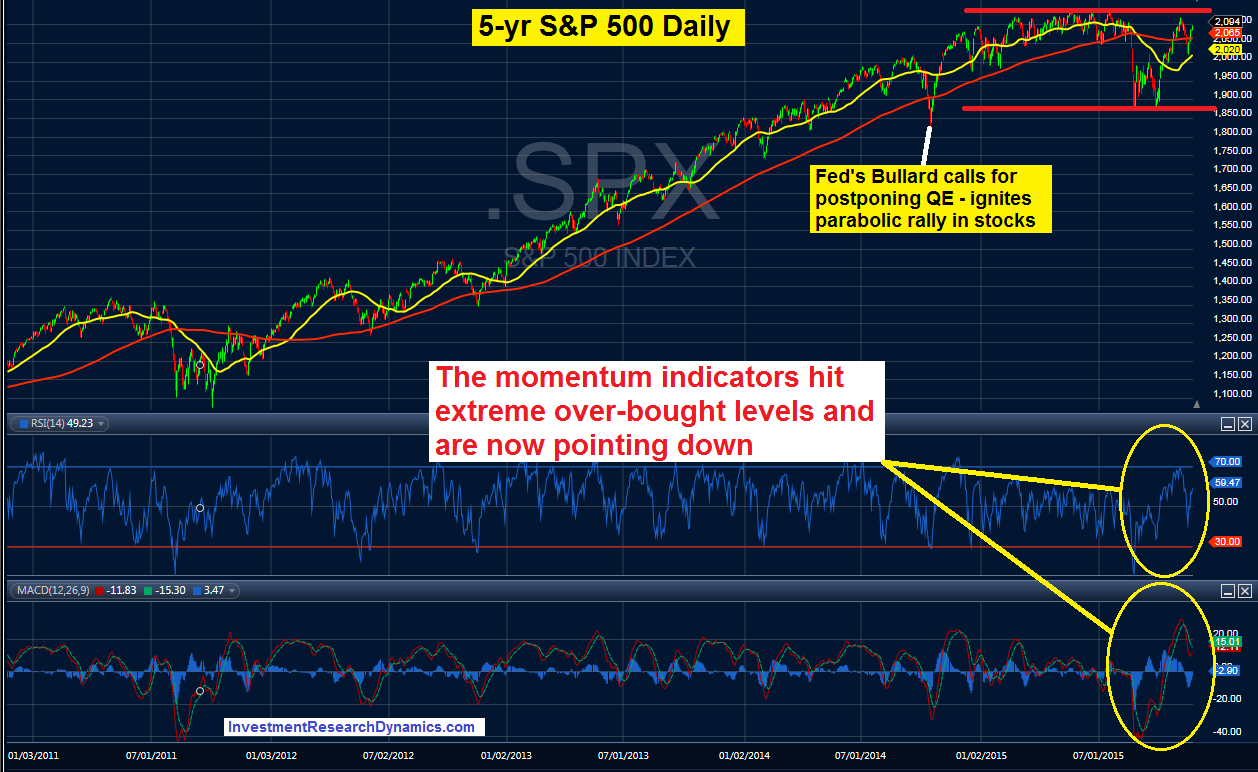 Although the stock market has had several “shock and awe” straight up rallies this year, since the beginning of January the graph of the S&P 500 looks like the infamous “bridge to nowhere:”    (click to enlarge) Up until January, the S&P 500 had risen at a near-continuous 45-degree angle, punctuated with an occasional and very brief 1% sell-off. Every time the stock market attempted to correct, the Fed either rolled out another new QE program in some form or used its regional emissaries to soothe the computer algos and retail investor cattle with sweet nothings designed to jawbone the stock market higher. As you can see from the graph above, the one sell-off prior to this past summer was halted a by a Fed puppet’s call for more QE.

The big plunge that occurred in August was triggered by economic fears and the plunging price of oil, capped by concern about the Fed raising interest rates by one-quarter of one percent.  And of course the Fed rolled out its emissaries to soothe the market and a decision to defer the one-quarter of one percent rate hike.   What does it tell us that  minuscule rate hike threat that looms like a nuclear bomb over the markets?…

The truth is, the markets are so disconnected from the underlying fundamentals that if the Fed were to pause for just a brief moment from its continuous market intervention, the stock market – along with the entire financial system – would collapse.

As you can see from the graph above, while the Fed – for now – has the ability to prevent the S&P 500 from a big sell-off, it’s been unable to push the S&P beyond the upper end of the sideways channel framed in red in the graph above.    And now we find out that the club of inside-connected, highly regarded large hedge fund managers have been unloading their stock holdings into every rally – LINK.

Currently the S&P 500 is being propped up with five stocks – AMZN, GOOG, FB, MSFT and GE.  Collectively these five stocks account for than 100% of the YTD return on S&P 500.  I can’t speak knowledgeably to four of them, but you can find why AMZN is the largest public stock Ponzi scheme in the history of the U.S. stock market in this report:  AMAZON dot CON.    I have an interesting paired traded strategy that I’m working that reduces the risk/volatility of shorting AMZN outright and it will be made available to anyone who purchases the AMZN dot Con report.

Beneath the veneer of those five stocks, there’s a bona fide bear market  going on in many sectors and individual stocks.  We saw this most recently with several retail stocks which went into cliff-dive mode after releasing quarterly earnings.  Some sectors of the market are down 20-50% this year.

Currently just about every possible economic indicator is telling us the economy in the U.S. is starting to collapse.  This is one variable over which the manipulators have no control. The price of oil is about to drop into the $30’s and the price of copper is likely going to go below $2 soon.  By all indicators, retail sales for the holiday season are setting up to be a disaster.  The big retailers know this which is why “Black Friday” sales promotions have already started.

The housing and auto markets are next.  The Fed and Government have once again over-stimulated demand for housing and new cars with subprime lending programs.  Demand has been “pulled forward” and sales in both markets are rolling over.

I don’t know how much longer the Fed can hold up the stock market.  At some point the gravitational force of the collapsing fundamentals will outweigh the Fed’s ability to keep a safety net under the stock market and a lid on the price of gold.  I predict it will get a point in which you won’t be able to get out of the stock market (extended market holiday) and you will have trouble finding physical gold/silver to purchase except in the private market at exceptionally high premiums to the quoted spot price.