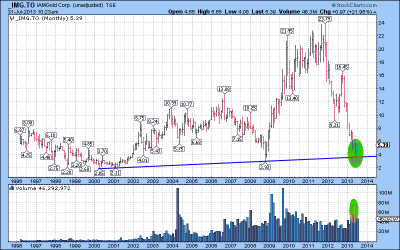 Yesterday we highlighted Newmont Mining as a potential buying opportunity in the gold sector. Today we take a look at another interesting situation.

IAMGOLD (IMG.TO) is a leading mid-tier Canadian gold producer with a $2 billion market cap that operates six gold mines on three continents and also operates Niobec Inc. which is one of the world’s top three producers of niobium.

Similar to our Newmont analysis, examining the long-term monthly chart going back to 1996 there were two major lows, one at $2.05 in 2000 and the other at $2.93 in 2008. If we connect these lows you can see a long-term rising trend line that has now provided support at the $4.00 level which was the low on the stock in late June.

The recent low was also accompanied by an expansion in volume as the final sellers have liquidated their positions with new shareholders now in place. This month we have seen some renewed demand creating an inside bar on the monthly chart.

Since the stock peaked at $16.45 last October it has failed to trade above the previous months high? The June high was $5.78 and so far this month the high is $5.65. If we see some renewed strength and the shares can close above $5.65 in August we would become very bullish on IMG.

Again, we are see a great buying opportunity unfolding in a good quality gold producer with a dividend yield of 4.6%.

The information contained in this report was obtained from sources believed to be reliable, however, we cannot represent that it is accurate or complete. This report is provided as a general source of information and should not be considered personal investment advice or solicitation to buy or sell securities. The views expressed are those of the author and not necessarily those of Raymond James Ltd.