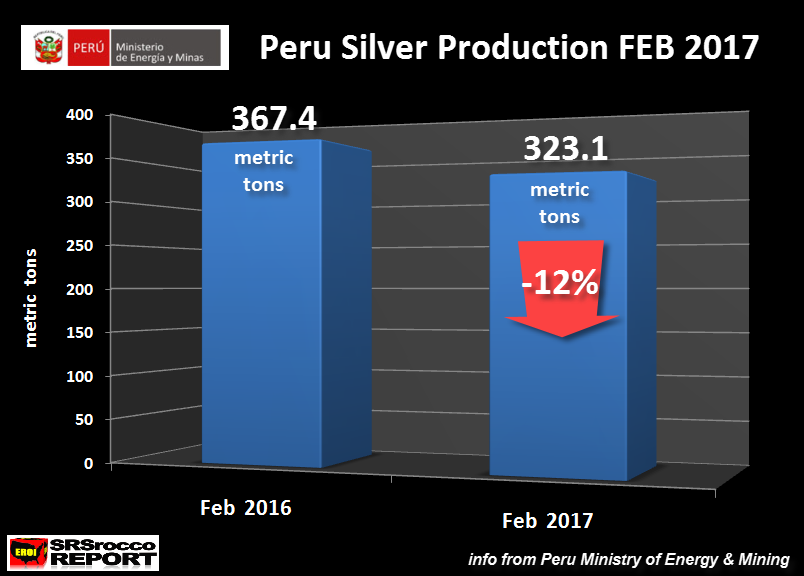 The Peru Ministry of Energy and Mining just released their silver production data for February, and it was a whopper to the downside.  Actually, I was quite surprised to see how much Peru’s silver production declined versus the same month last year.  Also, Peru’s gold February production took a similar big hit.

According to the Peru Ministry of Energy and Mining data, the country’s silver production fell 12% to 323.1 metric tons (mt) this February versus 367.4 mt the same month last year: This is a 44 mt decline in one month, nearly 1.5 million oz lost.  Here is the table from the Peru Ministry of Energy and Mining showing various metals production data for February:

Silver is shown as “PLATA” and as we see, overall silver production for JAN-FEB has declined 6.7% compared to the same period last year.  Which means, Peru’s silver production took a much larger hit in February than in January.  Furthermore, Peru’s gold production (shown as “ORO”), also declined significantly by falling 11.3% in February.

The Peru Ministry of Energy and Mining put out this brief explanation why their silver and gold production declined in February:

In the national production of silver, the Lima region (127,157 kg fine), Ancash (126,816 kg fine) and Junín (116,473 kg fine) regions are in the top positions, associated with the polymetallic exploitation of the center of the country. Peru is the second largest silver producer in the world and boasts the largest proven and probable reserves of this precious metal in the world.

The decrease is explained by the lower results (-23.53%) of the main producer: Minera Yanacocha S.R.L. Whose operations in Cajamarca have been affected by an exhaustion of the reserves in the current deposits in operation.

I don’t know why the Peru Ministry of Energy and Mining’s data for gold and silver production declines are different in their explanation than what they show in the excel spreadsheets.  However, it is only off by a small percentage.  Regardless, the important part of the text above is highlighted in RED.  The reason for the big decline of Peru’s gold production was due to “an exhaustion of reserves in the current deposits of operation.”  This is a KEY FACTOR that will be played-out across the world as other mines lose production due to the same situation of reserve exhaustion.

As the global markets finally succumb to the massive amount of debt, economic activity is going to plummet.  This will have a negative impact on most energy, metals and commodity prices.  Thus, production of base metals will decline significantly.  This will impact the production of silver the most at the majority comes as a by-product of zinc, lead and copper production.

Which means, more than half of the world’s future silver production is at risk when base metals prices take a big hit during the next economic crash.  People need to realize that using a massive amount of leveraged debt to continue economic activity is not only UNWISE, it is seriously INSANE.

While there is no guarantee what the value of gold and silver will be in the future, LOGIC suggests investors holding onto most STOCKS, BONDS and REAL ESTATE will suffer the financial enema of their life.  Again, this is all due to the disintegrating U.S. and global oil industry in the future.

So, PLACE YA BETS and let’s see who made the better investment decision when the global market finally cracks.

….also from the SRSrocco Report:

CONSPIRACY vs FACT: How Much Gold Is In The World??