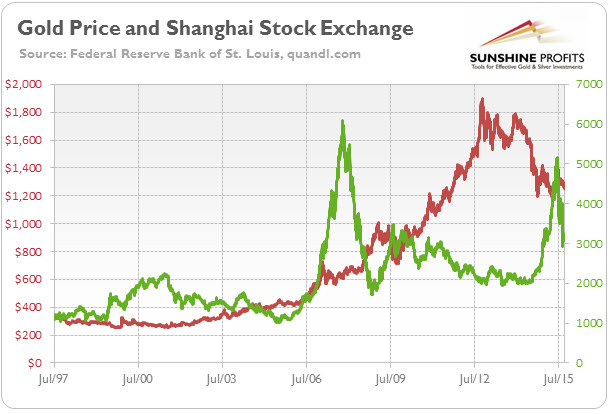 The stock market crashes were – alongside the devaluation of yuan – the most important recent developments in China. The stock market started rising during the summer of 2014, when the property market started to burst. The timing is no coincidence, as the government wanted to replace one bubble by another. By inflating (or at least cheerleading) the stock market bubble (by cutting interest rates and providing liquidity into the markets via the Pledged Supplementary Lending and Medium-Term Lending Facility, the Chinese version of quantitative easing both worth over the 2 trillion yuan), the Communist Party of China wanted to sell equity stakes of dangerously debt-burdened state enterprises and help clean up messy balance sheets, as well as to create a wealthy middle class, as a condition to move from exports/investment-led growth to domestic-consumption-led growth. Additionally, the start of the property market burst limited a viable investment opportunity for domestic investors, prompting them to reallocate their capital into the stock market. Consequently, China’s stock market surged more than 150 percent over the year, hitting a seven-year peak in the middle of June. Since then, mainly due to deleveraging, the Chinese stock prices have dropped nearly 40 percent (despite all government’s measures to prevent declines), culminating in a one-day drop of 8.5 percent on August 24 (the devaluation of the yuan has also added uncertainty to the stock market and triggered outflows from the stock market due to selling a yuan).

The Chinese stock market’s drop caused a decline in commodity and equity prices around the world, erasing $3 trillion in value from global stocks. The question is now whether China’s stock market’s burst spreads further into other markets and significantly affects the global economy and the gold market. Well, there are many arguments for saying that the burst of the stock market is less serious threat that the ongoing burst of the property market. Why? First, the PBOC and the regulators constantly pour liquidity into the markets. Second, the government launched a massive socialist-style rescue campaign and introduced many stock market regulations, limiting the potential decline. Third, the number of stock investors comprises less than 8 percent of the total Chinese population (while the home ownership rate is 90 percent). Fourth, the 0.03 percent of stock investors own 67 percent of the A-share market capitalization (A-share market combines shares traded in mainland China, which are available generally only to domestic investors). This means that the fate of the market depends not on the retail, non-educated investors, but on the bigger and smarter players. Fifth, the stock market is not the main channel to raise money in China. Equity funding is less than 5 percent of the total corporate financing pool (much lower than bonds and loans’ share) and it finances only about 2 percent of Chinese fixed asset investment. Sixth, stocks as a percentage of Chinese household financial assets amount to less than 15-20 percent (while real estate amounts to more than two-thirds of household wealth), so the declines should not significantly affect the real economy and consumption via the wealth effect (especially since the previous rally in the stock market did not trigger a boost in consumption indicating that gains remained largely unrealized).

However, it does not mean that the Chinese stock market’s performance is meaningless. Of course, the bust partially reflects the previous irrational exuberance not strongly tied to economic fundamentals, but the valuations of many companies rose due to the orgy of public spending and the real estate bubble. Therefore, China’s stock market crash should be viewed as a preview to the country’s coming crisis, when China’s credit and property bubbles will pop. This is why investors reacted so strongly to recent events in China – they could be a canary in a coal mine (usually, changes in stock markets reflect anticipated outcomes in the real economy) warning against the real crisis, which could potentially spark global contagion, and reminding global investors that stock markets all over the world are at unsustainable levels. During these times, valuations are so inflated for U.S. equity that the market is oversensitive to economic and financial news, therefore further declines in China’s stock market could trigger some chain reaction again, even if they are not a major cause for concern.

The chart below shows the performance of the Shanghai Exchange Market Composite Index and the price of gold. As one can see, there is no clear relationship between these two variables. Gold was gaining after the stock market crash in 2007-2008, however it was caused rather by weakness in the U.S. dollar and the U.S. stock markets. The current global economic situation seems to be more similar to the Asian/Russian crisis in 1997-1998 than to the Great Recession, so any potential gains due to safe-haven demand for gold may be capped by the upward pressure on the greenback. The key takeaway is that China’s stock market bubble came from developments in the property market, government meddling and irrational exuberance. The following crash is not likely to have major adverse consequences for China’s real economy, however it may be a preview of a coming crisis, which – given the current inflated valuations in global stock markets – may trigger some further bearish reactions. The bear market in stocks should be positive for the price of gold, however the appreciation of the U.S. dollar will likely exert downward pressure on the shiny metal. However, a lot “depends” and a lot “can change” in the meantime – we’ll keep monitoring the situation and describe the changes as they unfold.