How Will Brexit Impact the Gold Market? A Historical Perspective 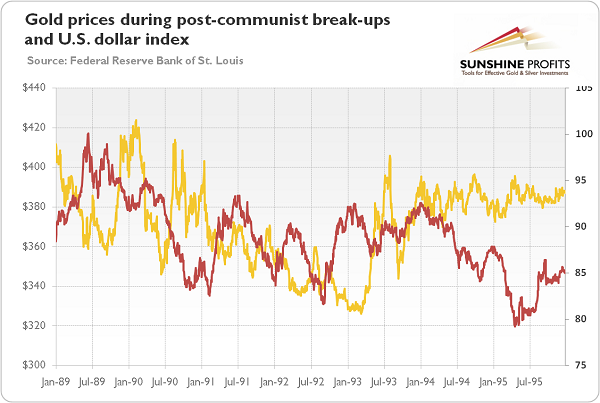 We know why Britons voted to leave the EU and what the UK’s options outside the EU are. Now, let’s analyze how Brexit could affect the gold market. We covered this topic in the latest edition of the Market Overview, as well as the daily updates of the Gold NewsMonitor, but today we will examine how the shiny metal performed during the past disintegrations of economic unions.

There are many examples of break-ups or exits from monetary unions (since 1945, more than sixty distinct countries or territories left a currency union), but these cases are not especially relevant for us, as Britain is not in the Eurozone. History also witnessed several break-ups of economic and political unions, like the collapse of the Austria-Hungary, Yugoslavia, the Soviet Union and Czechoslovakia. The Austro-Hungarian Empire ended in the very specific context of the First World War, when the gold market looked very differently, so we will confine ourselves to the last three cases.

As one can see in the chart below, gold was in the downward trend in the beginning of the 1990s, despite the turmoil in the Soviet Union, violent break-up of Yugoslavia and peaceful dissolution of the Czechoslovakia. There were big rallies in 1989 and 1990, but they were associated with the weakness of the U.S. dollar and American stocks (in 1990-1991, there was a recession in the U.S.). But these rises were temporary and gold quickly returned to the long-term downward trend. This behavior suggests that the price of gold does not react significantly to the political or economic break-ups. However, investors have to be cautious in drawing conclusions from this comparison. While Yugoslavia and Czechoslovakia were not globally significant unions, Brexit means an element of disintegration of the European Union, which would increase the risk of a full break-up of the biggest economic and political bloc in the world. The Soviet Empire was a major geopolitical player, but its dissolution actually diminished risk connected with the Cold War and increased the position of the Western world. Brexit, on the contrary, would increase uncertainty and diminish the role of West. This is why Brexit would be a real precedent even for the global economy and the gold market.

Chart 1: Gold prices during post-communist break-ups in the 1990s. Now, let’s focus on the previous exits from the European Union, as the Brexit – contrary to some popular claims – would not be the first withdrawal from the European Union.  Indeed, in 1962, Algeria gained its independence from France and left the European Economic Community, the EU’s predecessor. However, since the gold market was not free at the time, we cannot examine the impact of this breakup for the yellow metal.

The next withdrawal from the EU happened in the 1980s, when Greenland, a part of Denmark, left the EU. It was an interesting case, as Greenland held a referendum in 1982, but the exit was formalized only in 1985 by the Greenland Treaty. We shall add that the only controversial issue was fishing, and eventually the country did not fully exit from the EU, but adopted Overseas Country and Territory status, instead (it means that it remains subject to the EU treaties). If negotiations with Greenland (which is economically and politically less important that the UK) lasted three years, imagine how long Brexit might take (it could be great news for gold if the process increases anxiety and uncertainty, but it can be bearish for gold if the additional time makes investors think that there will be no Brexit after all or the final result will be close to Bremain anyway)!

As one can see in the chart below, the Greenland’s exit from the EU did not trigger a boost in the gold prices. Actually, the shiny metal entered into bear market in 1983. There was a rally in the summer of 1982, but it was caused by the recession in the U.S., the cuts in the Fed’s fund rate, and the fall in the U.S. interest rates.

The third withdrawal from the EU occurred in 2012, when Saint-Barthélemy, a small Caribbean island, left the EU and became one of the EU’s Overseas Countries and Territories. It would not come as a surprise that this small change did not shock the world and the gold market.

The review of the past withdrawals from the EU shows that the Brexit could be really unique. So far, only dependent territories exited from the EU, and since they were certainly not as economically and politically important as UK, they are not the best to guide how the UK departure might look. And the famous Article 50 of the Treaty on European Union, which set out the rules for exit, has not been tested yet. Hence, Brexit would be a whole new ball game, which should have much greater influence on the gold market.