How To Profit From The Ukraine Crisis 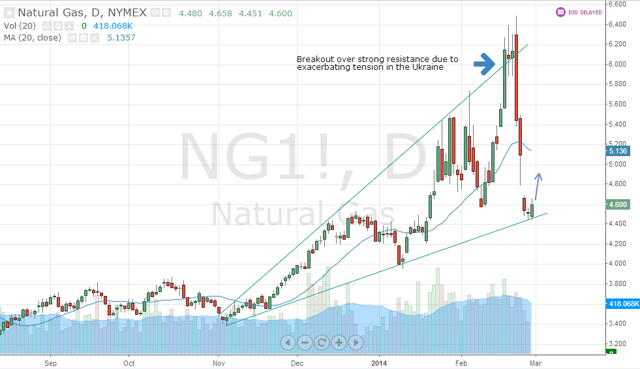 Natural Gas is down to $4:60  from its high of $13:60 in 2008 and and all-time high of $15:65 in 2005. With the Ukraine being a big supplier of Natural Gas, this author has an idea how an investor can take advantage of both the heavily sold out Natural Gas market plus a supply disruption caused by the Ukraine crisis – Money Talks

How To Profit From Events Unfolding In The Ukraine

As we enter a new week and witness the tension building between the Russians and the western backed Ukrainians, it appears that Eastern Europe enters uncertain and potentially dangerous times with echoes of the cold war. Just a couple of days after Sochi, the millions of dollars that went into building Russia’s PR seems to have gone down the drain. This weekend we read that Russian military forces had invaded the Crimea in the pretext of securing national interests and defending ethnic Russians in the aftermath of the Ukrainian riots. As I write this article, I’m hearing reports that Ukrainian military bases in the Crimea are surrounded and local military forces have been ordered to lay down their arms and leave the region. Those units have been instructed by Kiev that they are to defend their positions and fire back if they come under attack; they are not to surrender. Protests by the new government in Kiev went unheeded by the Kremlin and it has come to light that the deposed President of Ukraine, Viktor Yanukovych has fled for Moscow with the Russians affirming him to be the legitimate head of the Ukrainian state.

With every news release, the tension appears to only rise. Certainly the communication back-channels between the main powers have been activated to prevent armed conflict, which has the potential to draw in the most powerful armies in the world. It’s easy to overstate the danger in the current crisis and perceive the global appetite for war as being non-existent, yet I feel the markets tell it like it is in periods of added risk and instruments respond quite quickly with prices factoring in new geopolitical events. I believe that it will get much worse before it gets better, and even if the stand-off does not lead to all-out conflict between armies, it will be remembered as a close call. With this in mind, this new belligerency presents us with excellent trading opportunities. I will discuss the two most obvious ones here.

Russia supplies a large part of Europe’s natural gas. In fact 50% of Russia’s immense NG production is delivered to Europe which is up to 34% of Europe’s total supply. 80% of that gas passes through Ukrainian pipelines which has been a source of controversy in the past. One of the first things the leadership in Ukraine would do in order to pressure Russia to pull back its troops would be to simply turn off the tap. Cutting off European gas supply would create a shortage in the market at the tail end of winter and this shock would cause gas to become far more expensive. The other main gas supplying countries will see their GDP lifted as they will then receive a higher return for their NG production i.e Qatar, Norway, Canada.

It may be a good idea to buy natural gas at the current level, but because this is situation is “fluid”, stop losses are imperative. It’s also worth noting that cold March is forecasted for the USA which will lead to reduced stockpiles of the heating fuel. About The Alpha Generator

The Alpha Generator ltd. seeks to increase an investor’s profit through an investment solution where the asset allocation will add at least one security to a portfolio that will outperform all others without notably increasing the level of risk. This is achieved through relevant and prudent advice, financial education, and shrewd money management services. The Alpha Generator employs highly trained, intelligent analysts that have years of experience in the financial markets and knows them intimately. Each analyst is adept at a specific field in investment, whether it be stocks, bonds, ETFs, commodities or forex, and is ready and able to provide services regarding that field at your request. The Alpha Generator was primarily established to provide investors who do not have a background in finance with the tools necessary to trade for themselves. We work with our clients tirelessly and continuously so that they turn a profit, month on month.

The team at the Alpha Generator has a great track record of customer service. Our results from consultancy services are excellent and the return on money management have people talking. Prospective clients are free to view the up-to-date statements of the investment accounts. They can be viewed on this website at any time.