How To Profit From America’s Arctic Riches 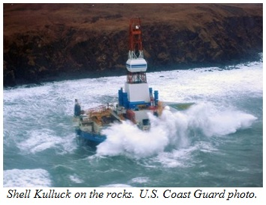 Less than a month ago, Shell Oil suffered a major setback to its Arctic drilling program.

Shell’s 28,000-ton drill ship Kulluck ran aground off of Kodiak Island, Alaska, after breaking tow lines during stormy weather. Prior to that, the U.S. Coast Guard evacuated the 18-member crew from the rig.

According to a Coast Guard spokesperson, winds were gusting to 70 miles an hour, and the sea state in the Gulf of Alaska is hurling 40-foot waves at Kulluck, as well as towing and rescue vessels.

Prior to the setback, in September and October 2012, Shell used Kulluck to drill a prospect in the Beaufort Sea, on the north side of Alaska. Shell was in the process of towing Kulluck to Seattle for off-season maintenance. However, a series of weather and mechanical problems began, when a tow line parted and, coincidentally, one of the tow ships lost engine power due to contaminated fuel. After that, the cascade of problems just worsened. Here’s a shot of the grounded rig:

A Shell spokesperson noted that the Kulluck grounding is a maritime accident. That is, it does not involve actual drilling operations. And on a positive note, the Kulluck has a unique, “Arctic-hardened” design, in which the fuel tanks are isolated in the center in the vessel, encased in heavy steel plating.

To date, Shell has spent nearly $4.5 billion on its offshore program in Alaska (including $292 million to upgrade the Kulluck.) The arctic region reportedly holds tens of billions of barrels of potential oil resource, in a major new oil frontier that is virtually unexplored. If you missed the dialog in 2012, this is a big deal for U.S. offshore industry.

Subsequently, Shell personnel pulled the rig off the rocks, and took it back under tow. There were no apparent leaks from the vessel. Shell and its contractors will give the rig a good inspection and survey, in a nearby Alaska port, with federal and state agents peering over their shoulders. Then, it’s off to the shipyard for a full overhaul.

And despite the Kulluck grounding, Shell shares are trading slightly up on the year, over $71. The dividend yield is still a husky 5.3%.

In response to the grounded Shell rig, the U.S. Department of the Interior announced that it will perform another “review” of proposed offshore drilling operations in the Arctic region. The review will cover Shell operations, as well as proposed offshore activities by other companies that want to work in the far north.

Along with catching the eye of the Department of the Interior, the setback also fired up another group of folks.

Opponents of drilling note that the waters in the Arctic region are home to a vast expanse of fragile ecosystems. Frigid water temperatures, year-round, make biodegradation of spilled oil all but impossible. Indeed, according to Lois Epstein, Alaska program director for The Wilderness Society, “Shell and its contractors are no match for Alaska’s weather and sea conditions either during drilling operations or during transit.” Let’s discuss…

As I was gathering information about the Shell incident, I noticed a snarky comment from someone — who could be anybody, anywhere — to the effect that, “this is what you get for using Gulf of Mexico (GOM) technology in the Arctic, unlike the Russians who are developing purpose-built Arctic tech.”

I’m not sure who this know-it-all is, but let’s address the point. First, I give the Russians great credit for having excellent naval technology, across many sectors. In fact, back in my Navy days, I used to chase Soviet submarines as part of my duties flying Lockheed S-3 “Viking” aircraft. So I know a few things about Russian competence in terms of building good ships to meet particular needs.

Submarines and drill ships are two different things, however. Yes, the Russians can build good submarines. But we have yet to see that Russian “purpose-built Arctic tech” actually hit the water, let alone work and perform well — and that means safely.

I also happen to know a few things about modern, Western offshore energy development technology. It’s not fair — and certainly not accurate — to say that Shell is using “GOM technology” to drill offshore Alaska. There’s plenty of superb, “purpose-built” tech out there, already developed, to drill offshore in extreme environments.

Consider, for example, energy development in the North Sea, and up off the coast of Norway. It’s much the same cold water, stormy seas, winter darkness and ice-problems as offshore Alaska. Look at the success of, say, Norway’s Statoil working in these kinds of extreme environments.

Just this week, in fact, Exxon-Mobil announced a major, $15 billion program to drill offshore eastern Canada, in cold, dark, iceberg-infested waters. It’s a major energy development program, with cooperation and support from the government of Canada, as well as provincial governments — all of whom know a few things about working in extreme climate conditions.

Over the past couple of years, I’ve attended technical sessions on Arctic development, via my annual treks to the Offshore Technology Conference and the American Association of Petroleum Geologists (AAPG) convention. At the industry-level, there’s a sense of “can-do” confidence towards extreme environments, but it’s tempered by a certain humility in the face of actual conditions.

When it comes to Arctic development, offshore Alaska, we’re in the early innings. Heck, we’re scarcely past warm-up pitching and batting practice. There’s much yet to be learned and much new technology yet to be developed. But the capability and potential is out there.

There’s plenty of money to be made, too.

One company I’ve tipped to my readers is Oceaneering International (OII.) The company holds an array of remote-operated vehicle (ROV) and related diving and field services. (The company also designs space suits for NASA, which is pretty cool.)

I first recommended Oceaneering back in May 2010, right in the wake of the BP blowout in the GOM. My reasoning was that the Oceaneering share price was down, due to the U.S. offshore drilling moratorium. But my prediction was that the services and products supplied by Oceaneering would be more important than ever, going forward, in the heightened culture of offshore safety.

Well, Oceaneering shares are currently trading at $58, which is a 5-year high. Better yet, it represents an 80% rise from 2010. The Oceaneering dividend yield is 1.2%, which is more than short term government bonds. All in all, Oceaneering has been a great play.

And do you know what? I foresee better days ahead for this underwater maverick. The company will continue to do well. There’s a large, and growing global market for its services, despite whatever happens with the U.S. economy.

As the arctic market evolves in the U.S. and the offshore industry continues to boom, keep riding this pony.

That’s all for now. Thanks for reading.

Byron King is the managing editor of Outstanding Investments and Energy & Scarcity Investor. He is a Harvard-trained geologist who has traveled to every U.S. state and territory and six of the seven continents. He has conducted site visits to mineral deposits in 26 countries and deep-water oil fields in five oceans. This provides him with a unique perspective on the myriad of investment opportunities in energy and mineral exploration. He has been interviewed by dozens of major print and broadcast media outlets including The Financial Times, The Guardian, The Washington Post, MSN Money, MarketWatch, Fox Business News, and PBS Newshour.