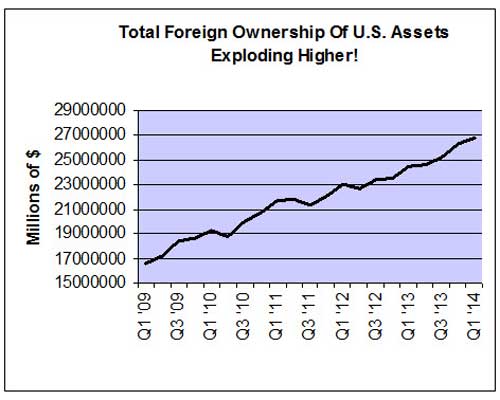 One of the most important aspects of the rising tide of geopolitical disruptions — as spelled out by the research I have done on war cycles — is how they are impacting the world’s financial markets.

As I’ve discussed many times, they are changing everything you thought you knew about investing.

Consider the U.S. property markets, which have already recovered from their lows quite nicely — even as mortgage rates have stabilized and started moving higher.

Or consider gold, which is now nearly 8 percent above its three-year bear market low of last year, even though the U.S. dollar is also sharply higher.

Or the U.S. stock markets, whose bull ride higher this year far exceeds what one would expect given the U.S. economy’s performance.

Moves that dumbfound most U.S. analysts, especially those — still in the majority — who still focus merely on the U.S. economy and who ignore what’s happening globally.

Gold is set to rise with a stronger dollar. Commodity prices in general will soon bottom and head higher, even though the global economy remains lackluster. Equity markets and property prices will increase with rising interest rates.

So what then is the common denominator behind these market moves?

What’s the fuel that is causing the linkages between them to change, wreaking havoc on old rules of thumb and ushering in new relationships between markets, with the economy or with traditional logic?

Creating forces that you must grasp to truly protect and grow your wealth?

You’ve undoubtedly heard the saying “Follow the Money” in the past. But today, it’s more important than ever.

Today, we live in a world where governments are at war with each other. Propaganda wars. Trade wars. Currency wars.

Today, we live in a world where governments are getting ready to reignite “hot” wars: Russia/Ukraine. China/Japan. Israel/Gaza. Not to mention the rampage of ISIS in Iraq and Syria.

And today, we also live in a world where the bankrupt governments are waging wars against their very own citizens, via tax hikes, confiscatory schemes and capital controls.

All of this is causing capital in nearly every corner of the globe to take flight, leaving risky countries or investments and heading toward safer shores.

In a recent column, Martin told you of the middle-class and wealthy families he personally knows who are living in some of the riskiest places in the world … and how they are packing up their families and their capital, seeking safety in other venues.

Then, this week, he told you how terrorists and militias are turning into full-fledged armies, prompting even larger flows of flight capital.

For many months now I have told you that those capital flows are pointing directly toward the U.S.

So how can one measure the amount of capital that’s pouring into our relatively safe borders and markets?

It’s no easy task. Reason: The data on capital flows collected by the U.S. Department of Commerce’s Bureau of Economic Analysis (BEA) and the Organization for Economic Cooperation and Development (OECD) often lag the actual flows by as much as a year’s time, making them subject to significant revisions.

Plus, the figures are subject to definitional problems, as capital flows are difficult to monitor and categorize.

Nevertheless, they give you a good handle on the amounts of capital that are flowing into our borders, supporting the big-picture conclusion that …

Capital is literally pouring into the U.S.

First, some notes. Both the BEA and the OECD keep track of our country’s “International Investment Position” (IIP). It’s a financial statement setting out the value and composition of our country’s external financial assets, assets that U.S. citizens and entities own abroad …

Versus our country’s liabilities, assets in the U.S. owned by foreign entities.

The net of the two is called our country’s “Net Investment Position” (NIP).

For our purposes, we only need to look at the liabilities side of the data — financial assets in our country owned by foreigners.

And they show that the foreign ownership of U.S. assets is surging: – Total foreign ownership of U.S. assets (excluding complicated financial derivatives) rose from $16.594 trillion at the beginning of 2009 to record $26.791 trillion at the end the first quarter of 2014.

That’s an astounding 61 percent gain in a short five years, a record for such a short time period.

It’s a total of more than 10 TRILLION DOLLARS that has flowed into U.S. investments from abroad. – $4.088 trillion, or more than 40 percent, was directly invested in portfolios that include equity investments, mutual funds, and other equity-related investments.

Considering that, at the start of 2013, the total market cap of all publicly traded stocks in the U.S. on all exchanges was just shy of $20 trillion, $820 billion in foreign investment means that foreign investors effectively purchased about 4 percent of our stock markets last year alone.

My view: Based on how the war cycles are ramping up for still another five years … and the fact that they indicate no relief until 2020 … capital is likely to continue to stampede into U.S. investments.

Reason: Despite our country’s problems, we remain one of the safest countries on the planet, with the most open, liquid and diverse markets in the world.

My words for you: Follow the big money; the large international capital flows. They are the single biggest key to protecting and growing your wealth — now and for many moons to come.

They are why U.S. equities are in long-term bull markets. They are largely why property prices are doing well, especially in high-end markets such as New York, Los Angeles and Miami.

As always, I’ll be reporting on all of the above with regularity and frequency.

And remember, you can let me know what you think about this and other topics right here.