How these 12 TPP Nations Could Forever Change Global Growth 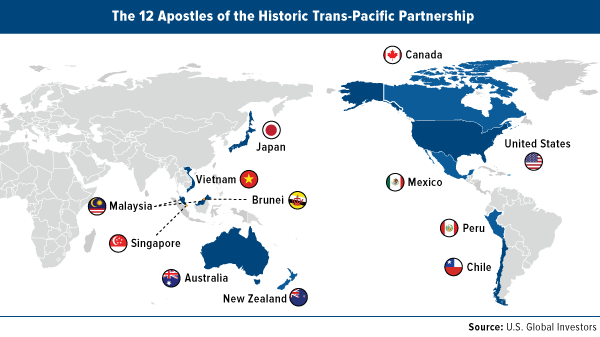 These are among many of the words that have been used lately to describe the Trans-Pacific Partnership (TPP) trade pact, which was finally signed in Atlanta this Monday by 12 participating Pacific Rim nations. After nearly seven years of negotiations, the TPP promises to deliver unprecedented free and fair global trade among the 12 participant nations.

Once ratified by each country’s congress or parliament—which is likely to happen in early 2016—the accord will become the most significant, most economically-impactful trade deal in history. As many as 18,000 tariffs are expected to be eliminated. It will remove barriers to foreign investment, streamline customs procedures and create an international investor-state dispute settlement (ISDS) system, among much more.

The Peterson Institute for International Economics, a Washington, D.C.-based think tank, predicts that the resultant savings could boost the world economy by an incredible $223 billion by 2025.

….read much more on TPP as well as SWOT analysis of Stocks, Bonds, Gold and Energy HERE