How the Federal Reserve is Showing Financial Fear 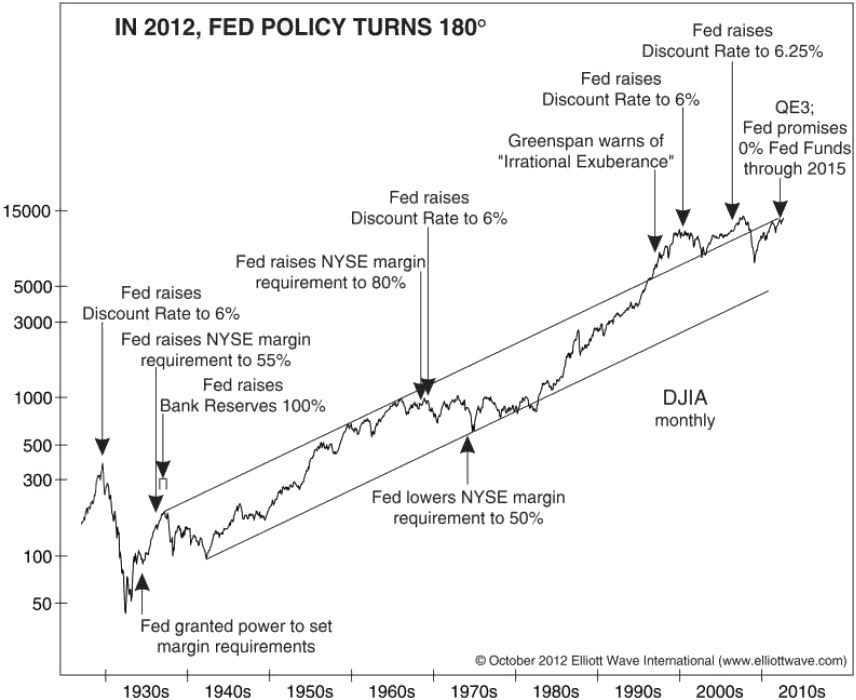 Think about one of those movie scenes when the leading man does all he can to defeat the big, bad enemy — punches, kicks, slams, stabs, shoots — but the bad guy just won’t go down. In fact he doesn’t even look fazed.

That’s when the protagonist really starts to worry.
In real life, that’s where the Federal Reserve finds itself today.
The central bank has thrown everything in its arsenal at the economy, but most key economic metrics have barely budged.
In the epic struggle, the Fed’s policy has been turned upside down.
In the latest Elliott Wave Theorist, Bob Prechter noted:
The Fed has changed its policy, and it has done so in dramatic fashion. Look at this history of what the Fed has done. Prechter continues his commentary:
You can go all the way back to 1929, and [the Fed] was doing what its job is supposed to be, which is to put dampers on exuberance and only make money easier when the markets are down and the economy is contracting.
Following that plan, the Fed raised the discount rate in 1929 to 6%. Here at the 1937 high, it raised margin requirements and bank reserves. In the 1968 bull market, when the public was excited about stocks, the Fed raised margin requirements and raised the discount rate to 6%. In 2000, right at that high, the Fed again raised its discount rate to 6%. In 2006, when the housing market was topping, and a year before stocks topped, it raised it to 6¼%.
What is it doing now? The market is right back in the rarified areas that it was when the Fed dampened speculation, but now the Fed is doing the opposite. Not only has the Fed not raised the discount rate to 6%, or even to 1%, but it is keeping the Fed funds rate at zero, and it is promising a 0% Fed-funds rate through 2015, three whole years.
This 180-degree turn tells me that the Fed is in a panic.
The Elliott Wave Theorist, Special Video Issue, October 2012
If the Federal Reserve itself is frightened about the financial future, perhaps you should be concerned too.
In the latest Theorist, Prechter explains why the Fed is not making any appreciable headway in combating the economic slowdown. And unlike the Hollywood movie that concocts an out-of-nowhere twist as a last resort for the leading man to defeat the villain, in real life, the Federal Reserve has no last-minute recourse available.
Get all of the insights that Prechter provides in his special video issue of The Elliott Wave Theorist. EWI offers a 30-day, risk-free review. Learn how you can be watching in moments as you follow this link.