How the Fed Just Destroyed the Bond Market 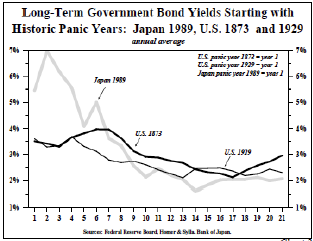 Bond investors don’t have anything good to look forward to anymore.

Up until last week, the bond market could look forward to a third round of quantitative easing (QE3) – aka money printing – and the renewed promise of low interest rates. But with the Fed announcing QE3 would last as long as necessary, bond investors can no longer look forward to QE4 or QE5. And that’s bad news for bond prices.

Quantitative easing programs haven’t lowered interest rates. Rather, as I explained in July, it was the anticipation of QE that lowered rates. Just look at this chart of the ­10-year Treasury yield… The numbers on the chart indicate the QE timeline.

The first point is when the Fed began its first QE program. Notice how interest rates fell sharply – as bond prices rallied – in anticipation of the Fed’s buying binge. Rates started to rise as soon as the Fed started buying bonds.

At Point 2, the Fed increased the amount of QE from $600 billion to $1.25 trillion… Yet interest rates continued higher.

By the time the first QE program ended in April 2010 (Point 3), the 10-year yield had risen from 2.1% to nearly 4%. Interest rates were right back up to where they were before the Fed got involved in the market. The gain in bond prices occurred in anticipation of the first QE program, not as a result of it.

Point 5 marks the end of QE2. You can see rates were higher at the end of the program than at the beginning. Once again, any gains in bond prices occurred in anticipation of QE, not because of it.

Of course, ever since QE2 ended in July 2011, we’ve been looking forward to QE3. Bonds have rallied, and rates have fallen. Two months ago, the 10-year yield dropped to an historic low of 1.4% in anticipation of a QE3 announcement.

We got that announcement last week (Point 6). Rates have been rising ever since… And they’re going to keep rising. Here’s why…

QE3 is open-ended. There is no end date. We have the Fed’s assurance that it will drop buckets of money on the market for as long as necessary. There’s nothing left for bond investors to anticipate. We won’t see bond prices rally and interest rates fall again in anticipation of the Fed doing anything. It just promised to do everything.

From here on out, the only thing to anticipate is when the Fed will stop.

At some point, the Fed will stop dumping $40 billion per month into the bond market. It’ll stop artificially manipulating interest rates. It’ll turn on the lights and take the punchbowl away. No one wants to be invested in bonds when that happens.

Bond investors are going to sell, anticipating the end of the party. With every piece of economic news that comes out, bond investors will wonder, “Is this report going to be strong enough to cause the Fed to stop?” And they’ll sell ahead of time.

By announcing an unlimited amount of QE, the Fed shifted the focus of the bond market. Instead of wondering when we’ll get more, the question now is when it will end.

The only hope bond buyers now have for lower interest rates is if the stock market corrects. Falling stock prices will spook investors and maybe push them into the perceived “safe haven” of the Treasury bonds market. As a bond investor, that will be your best chance to get out.

As a trader, it’ll be your best chance to short Treasury bonds.

Jeff has been anticipating the announcement of QE3. In June, he explained how to take advantage of it in the stock market.And in July, he showed readers why thebond market was in a lose/lose situation with more money printing.