How Much Longer Can OPEC Hold Out? 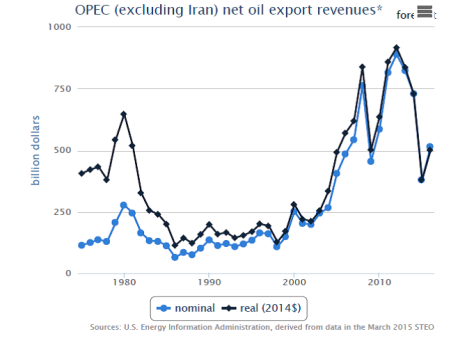 OPEC has been the most talked about international organization among investors, analysts and international political lobbies in the last few months.

When OPEC speaks, the world listens in rapt attention as it accounts for nearly 40 % of the world’s total crude output. With its headquarters in Vienna, Austria, one of the mandates of 12- member OPEC is to “ensure the stabilization of oil markets in order to secure an efficient, economic and regular supply of petroleum to consumers, a steady income to producers, and a fair return on capital for those investing in the petroleum industry.” (Source: opec.org).

However, OPEC has been in the line of fire from the western world in light of its stance of not reducing the production levels of its member nations (excluding Iran). Most view this as a strategy to squeeze the American shale production and other non OPEC nations.

All is not well for OPEC

Simply put, the world has too much oil at the moment which has resulted in the reduction of price levels from approximately $100 to $50 a barrel, and OPEC (as well as US shale producers) has a major role to play in this supply glut. With the decline of average annual crude prices, OPEC earned around $730 billion in net oil export revenues in 2014 (Source: EIA), a big decline of 11% from its previous year. The EIA even predicts that OPEC’s net oil exports (excluding Iran) could fall to as low as $380 billion in 2015.

Related: Media Spin On Oil Prices Running Out Of Fuel

With the huge reduction in its revenues and growing discomfort among its members such as Venezuela, Libya and Nigeria over its current production levels, is OPEC really getting weaker? With announcement of a historic nuclear deal framework between Iran and six global powers: America, France, Britain, China, Russia and Germany on April2, 2015, there is a good possibility that Iranian crude oil exports will increase greatly after June 2015 when the final nuclear deal is signed. Iran is all set to pump close to 300 million barrels of crude into the market, thereby kick starting another potential decline in oil prices.

This might be one of the most crucial junctures for OPEC and it has to consider the possibility of reducing its current production quotas, mostly due to its internal issues of which the cartel has many.

Containing some of the largest proven oil and gas reserves in the world, Venezuela is one of the founding members of OPEC. However, the country is reeling under a major economic recession since 2014 with an inflation rate of 68.5% (as on December 2014).

Cheap oil has created a huge financial crisis for Venezuela as its economy is heavily dependent on oil exports and oil revenues constitute about 95% of its total foreign exchange earnings. As per its state run oil company PDVSA, the country loses about $700 million a year with every $1 drop in the international oil price.

Related: Why The Oil Price Collapse Is U.S. Shale’s Fault For a nation that is suffering from shortage of basic requirements such as food and toilet paper, any further reduction in oil prices would result in a total economic collapse. Therefore, it would be in Venezuela’s interests to reduce its production levels especially after the Iran nuclear deal.

Could this be the reason for Saudi Arabia’s stance on oil supplies?

There’s an incredible energy development we’ve been keeping track of for you over the past year… It’s the reason Saudi Arabia is acting in desperation… depressing oil prices… and even risking internal unrest. Their (and OPEC’s) very survival is being threatened.
And we believe we’ve put together an incredible video revealing how it works.

Nigeria is Africa’s largest oil producer and among the top 5 global exporters of LNG. An OPEC member since 1971, Nigeria’s oil and gas sector represents about 75% of its total government revenues and 95% of its total export revenues. The African nation’s economy is heavily dependent on crude oil prices as its foreign exchange reserves (built as a result of net positive oil revenues) have reduced substantially over the past two years. Much like Venezuela, Nigeria needs international crude prices to be in the range of $90- $100 a barrel which is not possible unless OPEC reduces its supply.

After Saudi Arabia, Iraq is the biggest crude oil producer in OPEC. It also has the fifth largest proven crude oil reserves in the world. With an increase in its government budget spending, the country requires a stable international oil price of $105 per barrel to achieve its break-even point. The current oil price levels are nowhere near this. Apart from this, issues such as the ongoing ISIS insurgency, western sanctions, heavy economic dependency on oil (more than 90%) and poor infrastructure have added to Iraq’s woes.

Related: Who’s To Blame For The Oil Price Crash?

Apart from being the largest exporter of the total petroleum liquids in the world, Saudi Arabia is also the main driving force behind the cartel’s stubborn supply policy. The Saudis, along with Kuwait and UAE have been defending the decision of not reducing the OPEC production levels in order to retain their global market share. It is interesting to note that even if the oil price remains at the current levels, Saudi Arabia, Kuwait and UAE would have enough cash reserves to remain in the game for several years.

In short, these OPEC heavyweights have little to worry about from the current low oil prices for the time being.

United we stand, divided we fall.

In December 2014, the Energy Information Administration warned OPEC to reduce their production levels. According to the EIA, these cuts would be helpful for OPEC members such as Venezuela, Nigeria, Iraq and Iran as reduced OPEC supply and the corresponding increase in oil price would safeguard their uncertain future economic growth.

Leaving the heavyweights to one side; it is quite evident that OPEC, as a group, has become somewhat weakened. Apart from its falling export revenues and the growth of non OPEC producers, especially US shale production, OPEC now stands divided into two factions. One faction that is being led by Saudi Arabia wants to maintain and even increase its production levels while the other faction consisting of Venezuela, Nigeria, Iran, Iraq and Algeria requires just the opposite for safeguarding their national interests. In fact, the latter requires crude prices to be as high as $100 per barrel in order to balance their falling budgets (Source: IMF).

Last year, Saudi Arabia’s oil minister Ali Al Naimi said “It is not in the interest of OPEC producers to cut their productions, whatever the price is.”

A number of mitigating factors make this year’s June meeting of OPEC more interesting than ever.

By Gaurav Agnihotri for Oilprice.com