How Long Can Arbitrary Last? 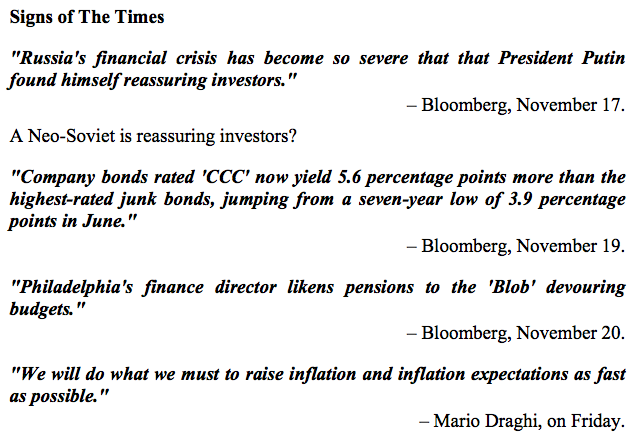 Central bankers have assisted the biggest bubble – ever – in bonds, demonstrating that they still do not understand inflation in financial assets. Lowest-rated bond price have been deflating since June.

This vital part of the investment equation – credit spreads – turned on our “model” in June. The “model” being that when lower-grade bonds become highly speculative going into around May seasonal forces can reverse the trend. It happened in June and we have routinely updated the chart of “BBB” versus long treasuries. With a number of corrections, widening is well-established but not far enough to provoke official anxiety.

However, in the really bad stuff spreads have widened from 390 bps to 560 bps. That’s for “CCC” relative to treasuries prompting the whistling-in-the-dark crowd to state that investment returns are now greater. Yes, but how great will they be next year? As Richard Russell might have observed about junk bonds “They are going to great valuations”.

Recent outstanding reversals that “happened” in June were also clocked in 2007 and in 1998 when the big boys at LTCM were caught betting the farm against Mother Nature. The sure thing was that European central bankers could narrow spreads at will–after June of that fateful year.

One sure thing that has faded after June has been spreads, but the central-bank-friendly crowd is convinced that “they” can continue to lower yields for European debt.

Since their lows in the spring the Russian bond has soared in yield from 6.46% to 10.32%. The spread relative to the German bond has soared as well. From 525 bps to 1107 bps. That is very damaging to unprepared portfolio managers.

Typically a boom can run for some 12 to 18 months against a flattening yield curve. In big booms such as in 2000 and 2007 the curve reached inversion. In 2000, the reversal in the credit markets counted out to March and in 2007 the count was to June. Both reversals to steepening heralded the onset of contraction.

Using the tens to twos, flattening began on December 1, 2013 and reached a “high” of .0233 in early-October. It plunged to .0163 on October 16th and has jumped back to .0233. Flattening has now run for 12 months so financial history is now within the window when cyclical change would be possible.

Spreads have accomplished a cyclical reversal which is a timely reminder that when Mother Nature wants to change credit markets – she does – and there is nothing that the central bankers can do about it.

The bond future is rising to test the high set at 147.75 on October 15th. Fixed income researchers are still reviewing the serious loss of liquidity in the most liquid market. Quite likely it is due to the massive and continuous intrusion in the financial markets by central bankers acting upon arbitrary whims.

How long can “arbitrary” last?

Well, arbitrary has run ever since the Fed opened its doors for mischief a hundred years ago and the next contraction will provide a harsh criticism. That would be from the markets and eventually from the public.

European bonds such as Spanish Italian and Portugal spent a number of months trying to set a bottom. Since the mini-crisis of October, yields have moved to new lows. The Portugal 10-year is down to 2.02%.

The Russian and Greek “Oracles” are working on some bad omens.

We thought it appropriate to review that the credit markets can quietly undermine speculative moves in equities. Some aspects of credit have been deteriorating, a little. Is the action in equities speculative?

Our big theme has been the key stages seen at or near cyclical peaks in the stock markets. These have been Exuberance (second run), Divergence (during the summer), Volatility (since October) and Resolution. The latter phase is inevitable but not yet in play.

With the most consistent rally in years, the S&P is on a run of record highs. The volatility is in the big swings in stocks, treasuries and low-grade bonds. VIX has collapsed.

Deutsche Bank has one possibility and that is “Goldilocks Scenario Materializes”.

The Springboard Buy registered with the October low and we have noted that following that signal in October 2013 we thought the rally could run into February, at least. Considering the rapid resumption of excesses this timing is uncertain.

We have been looking for another “Rotation”, similar to last year at this time.

This would include base metals and the mining stocks from a likely low in November. The stocks (SPTMN) set an oversold low at 654 on November 9th. The following Pivot noted the oversold and thought it could “pop a rally”.

Mining stocks have jumped to 764 on Friday which was through the 50-Day. It will need a little work to determine if the trend change has been made. Often the seasonal rally can carry into January.

On the zoom to the peak in July, the Oil Patch (XLE) registered a big Upside Exhaustion. The high was 101 and the sell-off was steep into October when it became the most oversold since 2008.

Our target for the sector and crude’s price has been for a significant low in December. A couple of weeks ago we noted that the RSI had plunged to 20, which was very oversold, but that the condition could last for a while.

The adjustment, similar to that for natural gas, to a new and lower price range seems to be working out. We have been unsure how long this would take. Our other and more recent concern has been that the price level may fall enough to curb much-needed revenues to the Neo-Soviets and Ancient Crazies in the Middle East.

We can give this one some time before looking to the long side.

This section was written yesterday and the section below updates a sensational change.

Grains (GKX) have recovered from a very oversold 290 in September to 327 a couple of weeks ago. We have been noting that on the way up corrections found support at the 50- Day ma. The move was accompanied by a big swing in momentum. While not all that high on the Daily RSI, the move from the extreme low to now is impressive.

Yesterday’s high at 326 could be a test of resistance at 327. If it doesn’t break out the one good commodity sector takes a long rest.

Usually the oil stocks (XLE) do not lead important changes in the product price. The recent pop in the XLE seems very vulnerable.

Actually, when looking at the crash in crude many investment sectors become vulnerable.

Our November 13th Pivot included charts showing that spikes up and failures in crude oil have been associated with recessions. That holds for Producer Prices as well. This could take a few months to realize and the path will be interesting.

Crude’s crash is profound, but on schedule. As we write, gold is down 0.25% and silver is down 1.00%. The gold/silver ratio is increasing which is appropriate to the possibility of increasing financial concerns.

The key to the sector has been gold stocks outperforming the bullion price. From a very oversold condition in late October the HUI/Gold set a minor uptrend. The ratio jumped from .128 to .153 last week. This bumped its head against the 50-Day and has backed off.

A correction was needed and some stability is also needed to set the bull market for gold stocks. Our advice last week was to wait and “buy on the dips”. The dip is happening and we would wait a while before starting.

On Toronto, Franco-Nevada is down 2% and Silver Standard is down 4%.

Our position has been that buying gold and silver as protection against deluded central bankers is essentially a speculation in currency. In this case against the dollar and the problem in a post-bubble contraction has been that the senior currency firms.

Investors should focus upon gold as an industry and should buy the stocks on the potential for improving earnings. This will be based upon the continued rise in gold’s real price. It is worth noting that since June gold’s dollar price has been rising relative to crude, which represents energy costs.

We continue to stand aside on this sector, looking for the big opportunity.