How High Will Interest Rates Go? 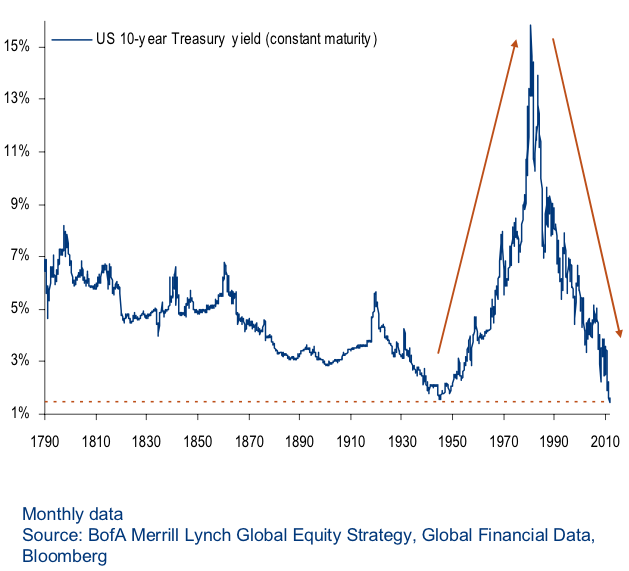 To best answer the question as to where U.S. Treasury yields are headed in the next quarter or two, it is important to know where they would be without the manipulation of our central bank, where they would be in a growing economy and, also, absent the threat from an imminent collapse of a major foreign currency.

And in the spring of 2010; a year after the recession ended, the conclusion of QEI and prior to the Greek bailout, the Ten-Year posted a yield of 3.8%. Therefore, it isn’t at all a stretch to anticipate yields going back toward 4% in the very near future–If indeed it is true that we are not currently in a recession, the Fed will soon start to winding down QE and there is no mass piling into Treasuries from a collapsing foreign currency.

What’s more, the Fed now holds over $3.5 trillion worth of securities on its balance sheet, $1.9 trillion of which are U.S. Treasuries. That compares with just $800 billion at the start of 2008. This means if the market now believes the Fed has started down the path of eventually unwinding its balance sheet the selling pressure will be immensely magnified as compared to several years ago. In addition, due to banking distress in China and a back up in yields in Japan, these sovereign governments may not be able to support Treasury prices to the same extent as they did in the past. These two nations already own $2.3 trillion of the current outstanding $11.9 trillion worth of Treasury debt.

Meanwhile, the Fed persists in sophomoric fashion to scold the market for misinterpreting its mixed messages about tapering the amount of asset purchases. But the big surprise for Mr. Bernanke and co. will be the realization that they have much less control of long term rates than they now believe.

I’ve been on record warning that once the market perceives the exit for QE is near, yields will rise. Nevertheless, expect most on Wall Street to claim the increase in rates has its basis in a growing economy and, therefore, represents good news for markets. But the true fallout from interest rate normalization will not be pretty; for it will reveal a banking system and an economy that is perilously close to insolvency.