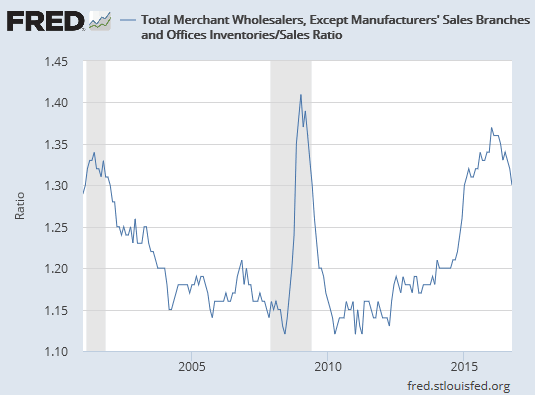 Go through the late 2015/early 2016 articles published on this and similar sites and you’ll find a consensus that 2016 was going to be a really bad year. Corporate profits were falling, business inventories had spiked, and deflation was deepening in Japan and Europe. See More Ominous Charts For 2016 for a longer list of indicators that seemed, a year ago, to portend imminent recession if not full-blown financial crisis.

As David Stockman put it in a late-2015 prediction piece,

The Keynesian Recovery Meme Is About To Get Mugged, Part 1

Needless to say, the soaring inventory-sales ratio is not a sign that “escape velocity” is just around the corner. Contrariwise, whenever the ratio has busted through 1.30X in the past, what came next was a recession. Recessions happen on the main street economy, of course, when sales weaken and inventories build to the point where liquidation of excess stocks becomes unavoidable. Accordingly, of far greater significance than the 19 labor market graphs supposedly on Yellen’s dashboard is the unassailable fact that wholesale sales have now rolled over.

The natural market driven bounce back from the deep liquidation during the Great Recession is now over and done. Wholesale sales are down 4.5% from their June 2014 peak and have returned to September 2013 levels.

Moreover, it is also well worth noting that at the most recent October 2015 level, wholesale sales are now up at only a 1.6% annual rate from the pre-crisis peak. Surely that does not measure an economy that is healed and heading toward the promised land of full-employment.

So the false conclusion about the US economy’s strength derived from the Fed’s faulty labor market telemetry cannot be emphasized enough.

There has been no Fed driven main street recovery. Instead, the tepid business expansion after the 2009 bottom embodied nothing more than the natural regenerative impulses of our badly impaired but still functioning capitalist system. As the inventories of goods and labor that were thrown overboard during the post-crisis plunge were rebuilt, incomes recovered and the cycle of expansion paddled forward on its own motion.

But that’s now done, and the US economy stands fully exposed to the albatross of peak debt and the gale forces of global deflation.

Yet here we are a year later, with US stocks at record levels, growth apparently accelerating and deflation morphing into modest inflation. What happened? Two things.

First, 2016 was a US presidential election year, and the desire to see incumbents hold power trumped whatever qualms Washington might have had about adding to its debt. So the Feds borrowed another trillion+ dollars, presumably spending it on things designed to make voters want to stay the course.

Second, the threat of deflation terrified governments from Japan to Germany, leading them to push interest rates into negative territory for a wide range of sovereign (and some corporate) bonds. Corporations, as a result, felt compelled to borrow as much as possible even if they had no material use for the money.

All this government/corporate cash sloshing around the global financial system has pushed up equity prices and led to a bit more hiring – though apparently still mostly of bartenders and waiters – that has in turn generated some good headline numbers. See Debt Surge Producing Fake Recovery.

The success of this latest bit of can-kicking leaves critics of the current system with a bad case of prediction fatigue. We’ve been tossing around terms like “unsustainable” and “imminent crisis” for so long that they’ve begun to lose both meaning and credibility.

The only consolation is that this is familiar territory. Bubbles tend to go on until most of their critics have been silenced. Tech stocks, for instance, were clearly a bubble in 1998 but didn’t pop until 2000. US housing became an obvious bubble in 2005 but didn’t pop until 2007. In each case the people who initially pointed out the danger were exhausted and/or ignored by the time they were finally proven right.

Since the current bubble – encompassing fiat currencies, government bonds and related derivatives – is by far the biggest and broadest ever, it shouldn’t be a surprise that it’s lasted well beyond what rational analysis says is possible. But it too will pop. In fact, 2017 is looking pretty bad…

….related: The Greatest Money Manager Alive Attributes The Majority Of His Success To Just This One Thing