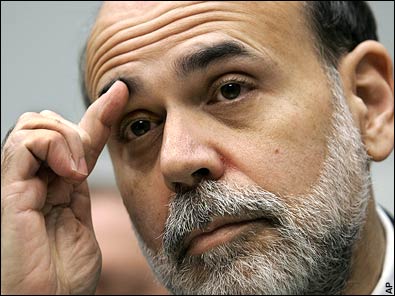 “If this credit bubble pops, the depression could be so severe that I don’t think our civilization could survive it.”

The Dow up 58 yesterday…nothing important there.

Gold up $31. Hmmm…what does the gold market see? More QE?

Last week, it was the IMF. It urged the Europeans to increase their money-printing efforts to avoid deflation. This week, the Financial Times tells Ben Bernanke to get off his cushy derriere and take bold, decisive action in the fight against the Great Correction.

Sebastian Mallaby, writing in the FT, says Bernanke is acting like a wimp. He needs to come up with some new weapons, new strategies, and new tactics. C’mon Ben, “show some real audacity.”

Ben Bernanke, hero of ’08, will not want to see himself stripped of his medals. He will not sit on his hands and watch as the US follows Japan down that long, lonely road towards stagnation. He will not want his resume blemished by a splotch of failure just when he faced his greatest challenge.

No, dear reader, he will ‘do something!’ — no matter how dimwitted it may be.

And here’s a BBC sage reminding Ben Bernanke what the greatest economist of the 20th would have done. “What would Keynes do?” he asks.

Of course, the answer is obvious to anyone who ever thought much about Keynes. He would have done just the wrong thing!

But that’s not the way John Gray sees it:

…The influential Cambridge economist has figured prominently in the anxious debates that have gone on since the crash of 2007-2008. For most of those invoking his name, he was a kind of social engineer, who urged using the power of government to lift the economy out of the devastating depression of the 30s. That is how Keynes’s disciples view him today. The fashionable cult of austerity, they warn, has forgotten Keynes’s most important insight — slashing government spending when credit is scarce only plunges the economy into deeper recession.

Even Richard Duncan urges the Fed to action. Duncan is unusual, though. He sees the problem clearly…which is to say, he sees it like we do. Here, CNBC reports on an interview:

“When we broke the link between money and gold, this removed all constraints on credit creation. This explosion of credit created the world we live in, but it now seems that credit cannot expand any further because the private sector is incapable of repaying the debt it has already, and if credit begins to contract, there’s a very real danger that we will collapse into a new Great Depression,” he [Duncan] argued.

“If this credit bubble pops, the depression could be so severe that I don’t think our civilization could survive it.”

Duncan argues that governments in the developed world should borrow “massive” amounts of money at the current low interest rates to invest in new technologies like renewable energy and genetic engineering.

One will offer to build a bridge to nowhere. Another will propose to assassinate a foreigner. Millions will put out their hands for retirement/health/unemployment and other forms of assistance.

And what will happen to the money? It will be gone…with only more debt…like “dead soldiers” left on the table after a party…to show for it.

Still, Duncan thinks that even if the money goes down a rathole, it still might make sense:

Even if this is wasted, at least we could enjoy this civilization for another ten years before it collapses,” he said.

That’s what separates a real pessimist from us optimists. It would be nice to see what Mr. Market would do. Left to do his work, he’d surely separate many of the rich from their money…he’d blow the doors of the banks…and flatten hundreds of corporations. He’d put a swift end to this Great Correction…and then we could get back to work.

But he wouldn’t wipe out our whole civilization! You have to be a genuine pessimist…to believe the correction will be fatal to our civilization.

Who knows? Maybe Richard Duncan is right. We’re all going to die anyway. In the meantime, and in between time, ain’t we got fun! Since founding Agora Inc. in 1979, Bill Bonner has found success and garnered camaraderie in numerous communities and industries. A man of many talents, his entrepreneurial savvy, unique writings, philanthropic undertakings, and preservationist activities have all been recognized and awarded by some of America’s most respected authorities. Along with Addison Wiggin, his friend and colleague, Bill has written two New York Times best-selling books,Financial Reckoning Day and Empire of Debt. Both works have been critically acclaimed internationally. With political journalist Lila Rajiva, he wrote his third New York Times best-selling book, Mobs, Messiahs and Markets, which offers concrete advice on how to avoid the public spectacle of modern finance. Since 1999, Bill has been a daily contributor and the driving force behind The Daily Reckoning. Dice Have No Memory: Big Bets & Bad Economics from Paris to the Pampas, the newest book from Bill Bonner, is the definitive compendium of Bill’s daily reckonings from more than a decade: 1999-2010.

Read more: How Ben Bernanke Can Prevent the End of Civilization http://dailyreckoning.com/how-ben-bernanke-can-prevent-the-end-of-civilization/#ixzz22EljBQ00