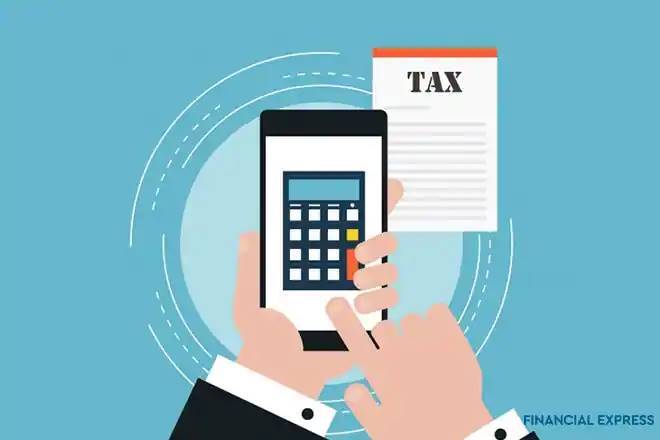 Is Hong Kong a harbinger of what is coming to the US?

With speculation growing in the US that in the aftermath of the Robinhood scandal, the Biden administration may pass a transaction, or “Tobin Tax” demanded by progressive democrats (according to a 2018 CBO estimate, a 0.1% tax on stock, bond and derivative transactions could raise $777 billion over a decade) and targeting HFTs and other “market makers”, overnight Hong Kong showed how it’s done when in a shock announcement, Hong Kong unveiled its first stamp-duty increase on stock trades since 1993, sparking a furious selloff in the $7.6 trillion market and sending shares of the city’s exchange to their biggest plunge in more than five years.

As Bloomberg reports, the plan for a trading-tax hike to 0.13% from 0.10% is part of a raft of new measures announced in Hong Kong’s budget on Wednesday that included increased spending and cash handouts (in the form of coupons) to help residents weather the pandemic. Even as the city’s economy has plunged over the past year, stock prices and trading have surged amid a global market boom. 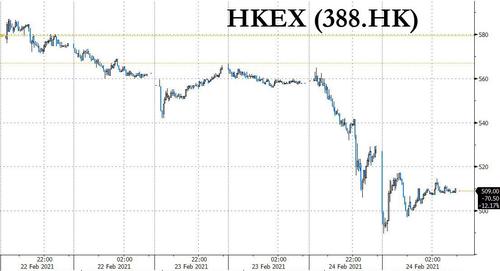 The plunge was especially awkward as it came after the bourse operator reported record annual earnings on Wednesday. Mainland-based funds sold a record $2.6 billion worth of Hong Kong stocks through exchange links with Shenzhen and Shanghai. That comes after 38 days of net purchases from north of the border.

The news was as shocking to the exchange as it was to everyone else. Calvin Tai, HKEX interim CEO said in an earnings call that the he wasn’t consulted by the government on its decision to hike the stamp duty.

“The impact will be significant,” said Kingston Lin, managing director of the asset management department at Canfield Securities in Hong Kong, ahead of the announcement by the city. “The market is doing very well and, of course, it will bring more revenue to the government. But higher transaction costs will be a concern for the exchange.”

And in a true Robinhood twist, an exchange spokesperson said that “whilst we are disappointed about the government’s decision to raise stamp duty for stock transactions, we recognize that such a levy is an important source of government revenue,” adding that “HKEX looks forward to continue working closely with all its stakeholders to drive the continued success, resiliency, vibrancy and attractiveness of Hong Kong’s capital markets.”

According to local media including Apple Daily and NowTV, the trading tax hike will be launched on Aug. 1 and the government expects it to generate an extra HK$12 billion a year. In the 2019/2020 fiscal year, the duty contributed HK$33.2 billion in revenue.

That said, the move risks damping a trading boom that has gripped the city and propelled earnings at the exchange. The bourse on Wednesday reported that profit rose 23% to a record HK$11.5 billion in 2020, helped by a 60% jump in stock trading. Its shares have surged about 150% from a low last year, making it the world’s biggest by market value.

Analysts at Citigroup Inc. estimated that the increased stamp duty will raise trading costs by 6% to 15%, pressing down trading volumes and crimping the exchange’s earnings per share by 3% to 7%.

While Hong Kong has been an outlier when it comes to taxing stock transactions, with major markets such as the U.S. and regional rival Singapore refraining, HK’s action may prompt more politicians into acting to transfer some capital from the financial sector to the people. Indeed, talk of implementing a tax on financial transactions has recently been rekindled by some Democrats in the U.S. after the recent trading frenzy in GameStop Corp. shares.