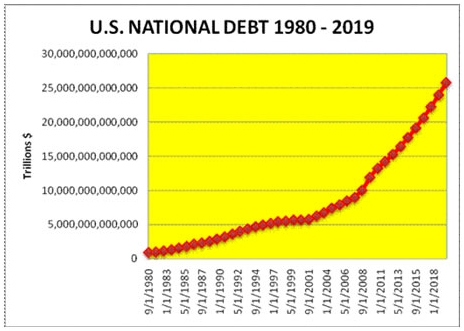 In Part One of this article I addressed the deceit of Hillary Clinton and politicians of all stripes as they promise goodies they can never pay for, in order to buy votes and expand their power and control over our lives.

I created the chart below for an article I wrote in 2011 when the national debt stood at $14.8 trillion, with my projection of its growth over the next eight years. I predicted the national debt would reach $20 trillion in 2016 and was ridiculed by arrogant Keynesians who guaranteed their “stimulus” (aka pork) would supercharge the economy and result in huge tax inflows and drastically reduced deficits. As of today, the national debt stands at $19.7 trillion and is poised to reach $20 trillion by the time “The Hope & Change Savior” leaves office on January 20, 2017. I guess I wasn’t really a crazed pessimist after all. I guarantee the debt will reach $25 trillion by the end of the next presidential term, unless the Ponzi scheme collapses into financial depression and World War 3 (a strong probability).