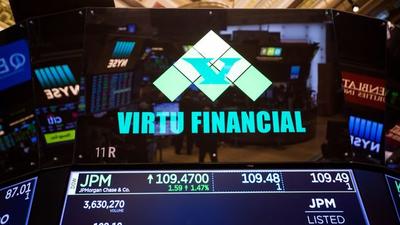 First it was the NYSE, or rather the “New Jersey Stock Exchange Located In Mahwah” that threatened to flee New York if a transaction tax seeking to scalp fractions of a penny for every trade is passed. Now it’s the turn of the firm whose entire business model is based on high frequency trading: Virtu.

According to Bloomberg, the company which has made billions in risk-free “market making” by seeing orderflow nanoseconds ahead of everyone else and trading accordingly, er “making markets”, is ready to quit New York lawmakers implement a financial-transaction tax which would enact a surcharge on stock trades to help close a projected four-year revenue loss, estimated at $39 billion. Lawmakers argue that reinstating the tax would raise about $13 billion annually, helping to avert cuts to services such as education and health care during the pandemic.

A similar financial-tax proposal in New Jersey has also been met with strong opposition from the finance industry whose entire business model has been reduced to scalping the same penny fractions that local governments are now seeking to pocket.

“I understand the pressures of these governments around their deficits,” Virtu Chief Executive Officer Doug Cifu said Thursday on the company’s fourth-quarter earnings call.

But “the notion of a transaction tax in New York is — I’ll use the word foolish. Because I know what we would do. I would shut this office.”

And go where? Florida? Good luck “making a market” if you have to suffer a several millisecond delay by having to route orders from Florida to NJ – where all the microwave towers serving US capital markets are located – and back again.

According to Bloomberg, Virtu has about 400 employees at its New York City headquarters, and is already looking for a cheaper office that will shrink its real estate footprint there by 75%. The company is also seeking sunnier climes by opening a satellite hub in Florida, in the wake of numerous hedge funds which have also decided to flee the tri-state area an its income taxes, opting for state tax-free Florida instead. Virtu has already built up its presence in Austin, Texas – a state that’s considering legislation to ban financial-transaction taxes to attract stock exchanges and financial firms, said Cifu, citing discussions with Texas Governor Greg Abbott.

Despite cries of outage from various financial industry participants whose own businesses are extremely reliant on continuing a model where only they get to scalp pennies from every order and any incremental tax would render their business models obsolete, state senator James Sanders and Assembly member Phil Steck said concerns about financial companies leaving New York were unfounded because it would cost billions to move and “makes no economic sense.”

But in a counterbluff, HFT traders argue that there are no barrier to departure: “We would just leave the state of New York and we would never pay a penny of the New York state transaction tax,” Cifu said.

As the bluffing by both sides continues, we eagerly await to see who blinks first.