Here’s What’s Next for China! 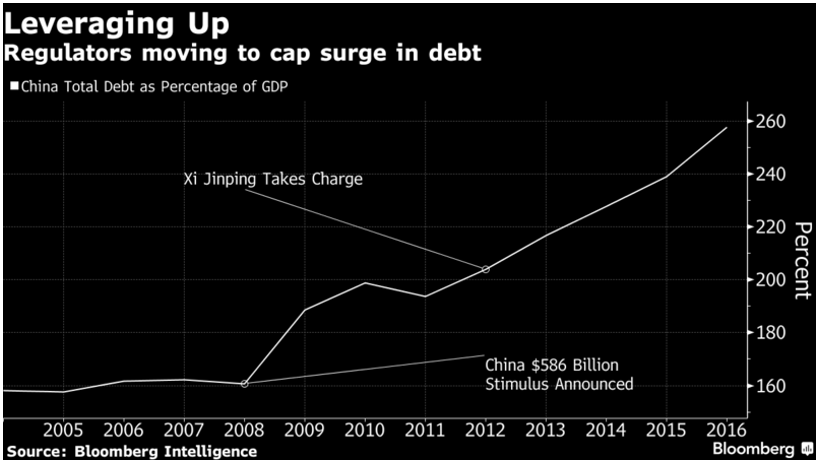 Chinese stocks have dropped for four straight weeks to their lowest levels in seven months, following a government crackdown on financial leverage.

In fact, the Chinese policy-makers’ crackdown on leverage has already erased about $500 billion from the value of the Red Dragon’s stocks and bonds.

There’s no doubt in my mind that China’s credit boom was getting a little out of control. Take a look at this Bloomberg Intelligence chart. While I almost fell out of my chair when I read these latest stats, the fact is a government crackdown on China’s excessive leverage is long overdue.

Chinese authorities have implemented several measures to strengthen the country’s financial stability. In fact, China’s banking, insurance and securities regulators are all playing a part in the program.

I’m also happy to see that China is focusing much of their attention on the nation’s shadow-banking system. Shadow-banking assets increased by 21 percent in 2016 to the equivalent of $9.3 trillion, or 87 percent of gross domestic product, Moody’s Investors Service reported.

Getting these shadow-banking shenanigans under control means improved long-term economic stability for China as officials rein in the debt pile and improve financial transparency.

The short-term pain Chinese stocks are feel now should lead to long-term gains for the Chinese economy. Plus, the government’s crackdown adds to investor confidence across the region.

And don’t forget: China’s economy is still humming along nicely. And earnings remain strong despite signs of moderation. Industrial companies’ profits jumped 24% in March from a year-ago, extending a surge from the first two months of 2017.

Plus, speculation has returned about massive infrastructure projects.

The “One Belt, One Road” initiative champions railways, ports, roads, dams, pipelines and industrial corridors across dozens of countries in Asia, Europe and Africa. And the program will spur a ton of economic growth for China and the region.

The bottom line: China and most of the Asian region are still among the brightest economic hotspots on the planet. And they’ll remain so for many years to come, if not decades.

So, how do you play the Chinese stock market in the months ahead?

My team and I are monitoring the markets in China and the rest of Asia very closely. And once the dust settles from this short-term turbulence, we will be ready to pick up a boatload of high-quality Chinese stocks on the cheap.

But just like in all investing, timing is everything! So remain patient and make sure you use the right signals at the right time.