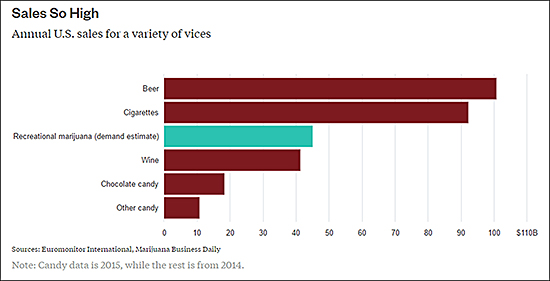 In last week’s Money and Markets article, I told you about how one of America’s biggest sin stock industries is positioning itself to profit from the expected legalization of marijuana at the federal level in the U.S.

In that article, I discussed how Big Tobacco executives have been exploring the opportunities of legal marijuana since the 1970s.

All this came to light after researchers combed through more than 80,000 top-secret documents, which had been turned over to the public following the 1998 national tobacco settlement.

Yes, even in those early days, tobacco company bosses knew the potential gold mine that marijuana could be if it became legal across the U.S.

Indeed, here’s how the legal marijuana business in the U.S. has grown:

According to reputable market research, the legal marijuana industry in the U.S. was a $3.4 billion business in 2015. In 2016, the market doubled to $7.1 billion.

Now, take a look at the chart below. There, you’ll see even more reasons why Big Tobacco is so interested in the marijuana business: That’s right, if the estimated yearly demand for marijuana is in the right ballpark, then more Americans crave cannabis than cabernet or candy bars.

This puts the potential market for recreational marijuana in the Big Three of America’s vices … trailing only cigarettes and beer.

And in this next chart, you’ll see why Big Tobacco is setting itself up to make a pile of gold in marijuana profits.

It’s because cigarette makers have been grappling with declining sales volumes for more than a decade.

And tobacco companies see themselves as perfectly positioned to profit if the Feds legalize marijuana for the entire U.S.

They have extensive financial resources, marketing muscle, political clout and the product-design technology to optimize the puff-by-puff delivery of THC (marijuana’s active ingredient).

You may not know this, but despite falling demand and stiff government oversight, tobacco has been one of the top-performing industry groups in the S&P 500 Index since the 1990s.

Yes, Big Tobacco boasts a well-documented track record of generating enormous profits under intense scrutiny. So it’s no surprise that the industry has its eyes on the whole marijuana pie, rather than just a piece.

Here’s what I mean …

Tobacco companies already have broad expertise in the distribution of their own controlled substance. That’s why they’re making a case to state regulators that they could apply this same expertise to the marijuana market — if only given the chance.

Indeed, they already have a wholesale network to distribute marijuana while safeguarding the system against bootleggers. Funneling marijuana sales through the same distribution network could help cut down on illegal sellers who obtain marijuana through illicit channels.

Here’s how their logic goes:

After federal legalization, state governments will need to regulate the marijuana industry in a way that’s similar to the tobacco business.

Distributors would act as middlemen between the producers and the customers. After all, they’ve already got the trucks, routes, employees, and established systems.

For state officials, their argument is sound:

Currently, tobacco wholesalers are accountable for the tracking, delivery, and taxing of all tobacco products. This means that for each carton of cigarettes distributed in each state, these wholesalers get a piece of the profits.

As the tobacco market fades and as marijuana becomes mainstream across the U.S., tobacco distributors want to apply the same tiered, top-down system.

That way, these same wholesalers will profit from distributing marijuana, which could breathe some new life into an industry that’s struggling for growth.

In many ways, the marijuana market of today resembles the tobacco market before it matured — before cigarettes were mass produced and sold through vast distribution networks.

With Big Tobacco eyeing the possible treasure trove in marijuana, you should consider investing a portion of your portfolio in weed too, if your risk profile permits it.

But with more than 200 marijuana stocks currently available on the publicly traded markets, you’ll need to roll up your sleeves and do your homework. Be highly selective — and here’s this week’s big tip — look for companies that have expertise in or that are focused on multi-state distribution.