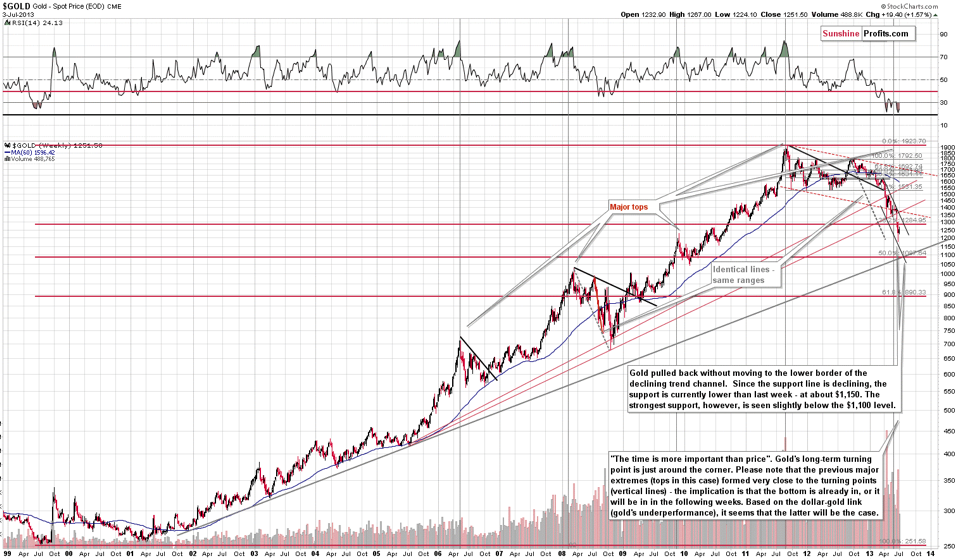 One of the most important pieces of data last week was Friday’s U.S. non-farm payrolls report. U.S. employers added 195,000 new jobs to their payrolls last month, exceeding expectations of 165,000, the Labor Department said on Friday, cementing expectations the Fed will start winding down its $85 billion monthly bond purchases.

It was a very bearish factor for gold which resulted in its fast decline. The yellow metal dropped to $1,208 per ounce on Friday.

“We’re predicting gold will continue to drop year after year roughly by $100 on average each year,” Michael Haigh, managing director at Societe Generale, told reporters at a briefing in Singapore. Haigh sees gold prices hovering around $1,200 toward the end of the year and falling further to an average of $1,150 in 2014. He also said that as prices fell below $1,200, some gold miners would start hedging, adding to the bearish momentum.

Is he right? Will gold revisit its June 28 low at $1,180.71 per ounce and then decline below this level? Will it trigger further declines in mining stocks?  Let’s check what happened and what did not happen during the last several days and find out where the precious metals market is likely to move next.

At the beginning let’s take a look at the long-term gold chart and check the current situation in gold (charts courtesy by http://stockcharts.com.). In recent days, the price of gold has been trading sideways below an important resistance line, the first Fibonacci retracement level, verifying the breakdown. With a verified breakdown and the declining trend channel in place, we still have a bearish outlook. The most important support level for gold is slightly below $1,100 where two major support lines intersect. These are the very long-term support lines and, at the same time, the 50% Fibonacci retracement level for the entire bull market.

Despite Friday’s data and a bearish outlook, Monday and Tuesday sessions were quite good for gold bulls and the yellow metal climbed up to over $1,260 per ounce. Today (at least at the moment these words are written) we also see a positive sentiment. Has gold already bottomed?

At times, gold stocks can tell a lot about the situation on the entire precious metals market. Let’s take a look at the gold stocks index – the HUI. In this week’s very long-term HUI index chart, we can see that not much changed last week and declines remain in place. The downtrend will continue as long as the index is below the 250 level. At this time, we should pay attention to Monday’s and Tuesday’s declines, which pushed the index below 220. From this point of view we may consider that the final bottom will probably form close to or slightly above the 2008 low as indicated by our red ellipse (which also includes the 61.8% Fibonacci retracement level).

Once we know the current situation in the most followed commodity stock indices, let’s take a look at the gold-stocks-to-gold ratio, which is one of the more interesting ratios there are on the precious metals market. After all, gold stocks used to lead gold both higher and lower for years. The ratio moved lower last week, which has bearish implications.

“ the trading channel and the next horizontal support intersect at a point much lower than where this ratio is today. (…)The ratio might move to its target level – the 2000 low – close to the 0.135 level, which is a quite clear forecast as far as direction of the next move is concerned.”

From this perspective the downtrend remains in place here and we haven’t seen any significant bullish indications.

Our final chart today is the short-term GDX ETF, which confirms the bearish outlook. In this chart, we see that the pullback at the end of June was only to the first Fibonacci retracement level. Prices are quite close to this level now and at times approached the 50% level. With this tendency in place, a bigger move lower is still probable even though we could see some very-short-term strength first. As long as GDX remains below $26.35, the downtrend will remain in place. Perhaps the next move to the downside will be the final one.

Summing up, the recent move higher in gold has not been validated yet, and the outlook remains bearish. The charts of gold suggest that the recent rally is nothing more than a pullback. Gold stocks declined despite a rally in gold and the general stock market. These declines in mining stocks are bearish signs for the entire precious metals market for the coming weeks. Naturally, gold and gold stocks don’t have to move as low as described on the above charts – there is a specific price level at which it might be a good idea to open a long position in gold even before these downside targets are reached.